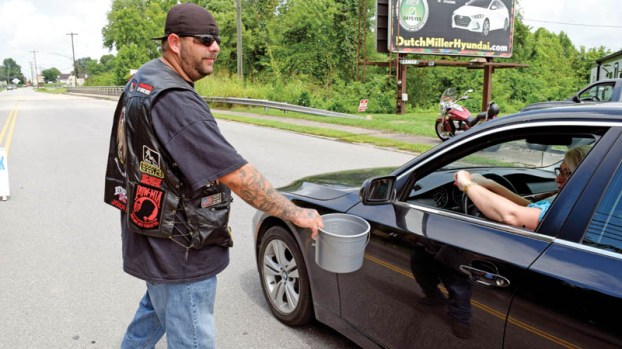 Robert Hudnall, an American Legion Post rider with Post 433 in Ironton, was collecting donations on Friday for children of military families needing school supplies at the intersection of Marion Pike in Coal Grove and South Third Street in Ironton.

Collecting for a cause

Members of American Legion Post 433 of Ironton had buckets to accept money. Most people rolled down their windows and put in change or a couple of bucks and went on their way without asking what the money was going for.

Tom McClain, a past commander of Post 433 and a member of the honor guard and the color guard, said he and three other members were collecting money to get school supplies for kids in military families.

“We donate to any of the kids going back to school from military families who need help,” he explained. “If their dad or their mom are deployed and they need help, we get the kids stuff for school. We’re glad to help them.”

McClain said the drivers were generous, even if they didn’t ask what they were donating to.

“A lot of people throw in change, but we’ve also had people throw in a fifty or a hundred dollar bill,” he said. “It all goes for a good cause and we appreciate it. We have our signs out here so they know we aren’t some scam operation and that the money goes towards what it was raised for.”

The Legion members were happy with the nice weather, because, some years, it is brutal.

“We’ve been out here in the rain and when it’s 110 degrees. But it doesn’t matter,” McClain said. “We’re out here for the kids and for veterans.”

McClain said the post does two fundraising events like this a year. One is in August to get kids school supplies and the other is on Black Friday, the big shopping day after Thanksgiving, and the money from that goes to buy veterans in nursing homes items for Christmas.

“We go to five rest homes; two in Ironton, one in Coal Grove and two in Burlington,” he said. “We go up and ask the veterans what they want, not what we want to give them. And we get everything they ask for. They may just ask for candy and some pop. They may want clothes, watches; things like that.”

Volunteers sought for river clean up

Crew of ‘garbage barge’ will be in Ironton for next two weeks A group committed to cleaning up the nation’s... read more