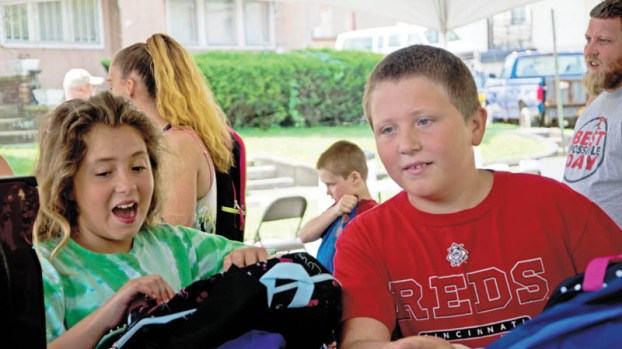 Landon and Lilly Howard pick out backpacks during the 13th annual Tools 4 School event on Saturday in Ironton. More than 1,600 backpacks were distributed to children from kindergarten through high school this year.

Families lined up early on Saturday to get a boost in preparations for the new school year.

According to volunteer coordinator Nancy Corn, 1,600 backpack were prepared and loaded with supplies to be given out,

“We’ve had a good turnout,” she said. “The line was wrapped around the Episcopal church.”

Corn said many others in the area took part in organizing the event, including the Child Welfare Club, the Rotary Club, First Nazarene Church, Christ Episcopal Church, the Ironton Catholic community and Triedstone.

“We wouldn’t be able to do it without everyone’s support,” she said. “There are lots of businesses and individuals involved.”

Helping out was All Saints Lutheran church, of Worthington.

Jason Wheeler, a coordinator with that church, said members take part in the event annually.

In addition to the giveaway, there was a street carnival set up, featuring inflatables and hot dogs. Volunteers provided free haircuts for children, while a cake walk took place and the BARKer Farm petting zoo was on hand.

Those checking out the zoo could see its latest addition, Lincoln, a six week-old lemur.

According to Kate Barker, co-owner of the zoo, they had just purchased him this week.

Since the event’s founding, Tools 4 School has distributed more than 22,600 backpacks to kindergarten through high school students.

Collecting for a cause