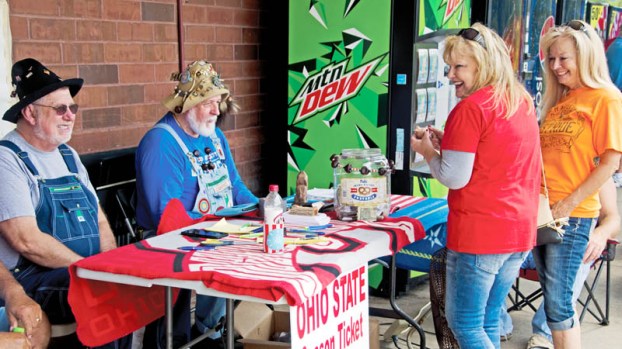 The group had their signature beat-up trucks on hand and sold hot dogs and soft drinks, to raise funds for their mission to take children to Shriners hospital in Lexington, Kentucky and Cincinnati.

The group employs it’s A Team drivers to take children and families to the facilities, at no cost.

One of their passenger vehicles was parked at the plaza, bearing an inscription noting that it was paid for with funds from the group’s Vidalia onion sales.

“We have three at the temple,” Roger Morgan, raban for Clan 1, said of the vehicles “We try to get a new one every three years.”

The group was also selling raffle tickets for season passes for The Ohio State University football. The winner will be drawn in Columbus on Aug. 13.

Morgan said the group has several events planned for the coming months, including the Rush Off Road in Kentucky next month, as well as taking part in Rally on the River in Ironton, where they handle parking.

The Ironton Hillbillies were established in 2010, as an outhouse for the hillbillies, which began with a clan in Ashland in 1970. Since then, clans have opened nationwide.

The group’s 50th anniversary is coming in a few years and Morgan said they hope the festivities can take place in Ashland.