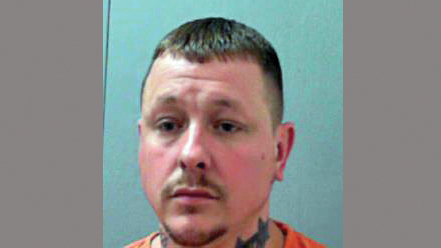 BURLINGTON — A man who escaped from a West Virginia prison was arrested Thursday afternoon in Lawrence County.

The arrest came after a Lawrence County Sheriff’s deputy was dispatched to the Family Dollar in South Point for a shoplifting complaint.

According to witnesses, a man and a woman took several items and then fled in a red and silver car with West Virginia license plates.

Deputies patrolled the area and located the vehicle on Township Road 1026. They made contact with a woman at a residence who said the man had left in the car. The deputies came back to the residence later. They found and detained Charles Wentz, 39, of Chesapeake. He was handcuffed and was being walked to a patrol car when he took off and fled into a wooded area near Burlington.

The K-9 unit, Deputy Steve Sisler and canine Johnny, were called in.

Johnny tracked Wentz for about a mile before the suspect was located in some brush near U.S. 52 and County Road 120.

Once at the jail, Wentz identified himself and said he was wanted for escape from a prison near Welch, West Virginia.

Wentz had escaped from the Stevens Correctional Center in Welch, West Virginia on Aug. 5. He was convicted of robbing the Clark’s Pump and Shop on Fifth Avenue in Huntington, West Virginia in November 2013, soon after he had been paroled from prison after serving time for robbery.

He was sentenced to a 2-18 year prison sentence in January 2015 after pleading guilty to second-degree robbery. His projected release date was July 2023.

A woman who allegedly helped Wentz escape prison, Christine Rodriguez, 37, was arrested on Monday by Putnam County deputies and has been charged with conspiracy and aiding a prisoner with escape. Details on how Wentz escaped or how Rodriquez assisted has not been released.

“I would like to commend the work of all officers involved in this apprehension,” he said. “Having our K9 Johnny is a true asset to our department.”