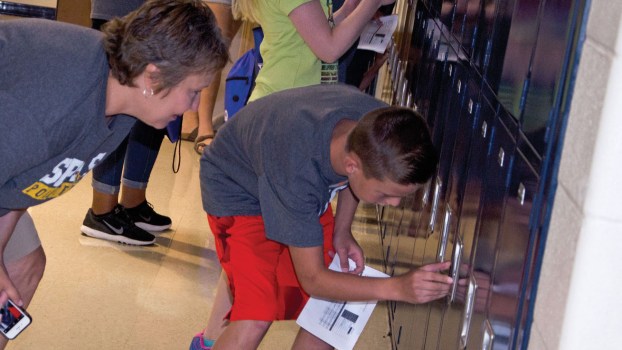 The Tribune/Heath Harrison Guidance counselor Cindy Christian helps students learn to use combination lockers during Back to School Camp on Friday. 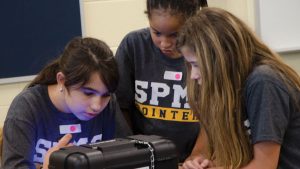 The Tribune/Heath Harrison
Ella Cassidy, Jasmyn Jones and Kiayra Litteral attempt to open the treasure chest in the Escape Room challenge at South Point Middle Schools Back to School Camp on Friday.

Students learn the in and outs at South Point Middle School

SOUTH POINT — The transition from elementary to middle school can be jarring and create a bit of culture shock for some students.

So faculty at South Point Middle School hosted an event on Friday to help ease incoming sixth graders into their new environment.

A Back to School Camp took place, in which students learned the basics of middle school, life, such as using combination lockers, reading their class schedule, getting the feel for the layout of the building and walking on the right side of the hall to prevent traffic jams between classes.

First, they took students on a tour of the campus, showing them where classrooms were located and which floors were reserved for each grade.

“I feel like I’m in kindergarten again,” one of the students said, taking in everything new.

After the tour the students were then shown their lockers, and given their combinations and asked to take their first crack at opening them.

Few were able to manage it on the first try, but after some frustration and, with assistance from the faculty, most were able to get the doors open.

They were then split into three groups and dispersed to take part in three activities.

Chapman took a group to the gym, where she passed a microphone and had students introduce themselves.

She then had them form groups of four, and required them to be evenly split between South Point and Burlington, allowing the student of their one-time rival schools to get to know their new classmates.

In the library, Bentley was conducting an Escape Room, giving students a series of clues to solve, leading to the opening of a treasure chest, again requiring skills with a combination lock.

In the computer lab, Chapman showed her group the technology they would be using. South Point loans each student a Chromebook laptop for home use.

She also explained her duties to students, telling them they can come to her if they feel bullied by others.

Bentley said the goal of the day is to ease the nerves of the incoming group.

“It’s an easier transition to a whole new set of expectations,” she said. “”We hear from parents and they love this event.”