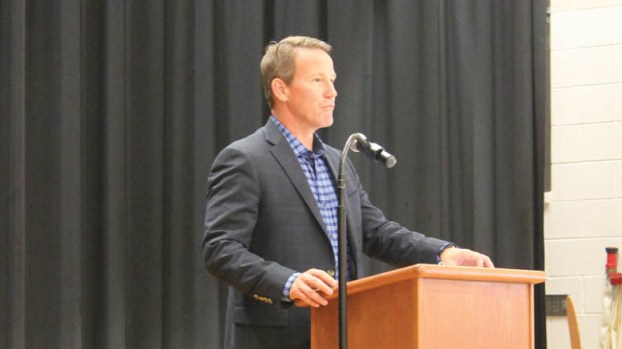 The Republican nominee for lieutenant governor was in Lawrence County on Thursday, outlining his ticket’s platform for the fall election.

Husted also made an appearance at a Lawrence County Republican event Thursday evening at Chesapeake High School, where he talked about his background, some of his accomplishments in office, and what he, along with DeWine, would do if elected.

“Today, we have 47 percent more businesses that are filing every year in Ohio than they did when I got there. That means jobs, that means opportunity, and it also means a lot more revenue, 47 percent more customers,” he said of changing the way new businesses start since he got in office. “And in addition to that, I just looked at the new numbers today, because of all of the automation we put in place through attrition and early retirement over the course of eight years, I have 42 percent fewer people working in my office than I did when I got there. We’ve become so efficient, that we no longer need any tax dollars to run our office. And we’re providing better customer service, we have more customers and everything is running better.”

He added that he plans to continue the process of automation, and would try to make Ohio a place where people wouldn’t have to go into a government office ever again.

“That’s a fundamental difference between us and the Democrats. They want to create more government jobs, they want to take your tax dollars. They think more government is good,” he said. “We think better customer service is good, that less government is good, and people get to keep more of what they earn. And that’s consistent with our values; hard work, personal responsibility. We have to make sure that if we want to win elections, that it’s about doing what we said we’d do and representing that and fighting for people in the way they live their lives everyday.”

Polls show a tight race for governor, with the most recent survey in the race, by NBC News, taken from June 17-21, giving DeWine/Husted a four-point lead over their opponents.

Previous polling had the Democrats leading and the average of all polling by Real Clear  Politics puts Cordray.Sutton up by 1.6 points.

Democrats responded to the candidate’s visit to Lawrence County, releasing a statement taking issue with what were problems DeWine’s stance on trade.

“Ohioans are tired of Mike DeWine, Jon Husted and Columbus Republicans putting the priorities of big business over the well-being of working Ohio families,” Ohio Democratic Party spokesperson Robyn Patterson said on Thursday. “DeWine was a champion of bad trade deals that resulted in the overseas outsourcing of American workers’ jobs and the decline of domestic manufacturing. And DeWine relentlessly fought efforts to raise wages for working Ohio families. After watching him spend 42 years looking out for the interests of the wealthy and well-connected, Ohioans know better than to trust DeWine with their jobs.”

Husted and DeWine will visit the county again for a private fundraiser in coming weeks.

The Thursday visit by Husted followed another party event in the past week for local Republicans.

Democrats say that Cordray is expected to come to Lawrence County for a stop in coming months as well.

Joined by Lawrence County Republican Chairman Jason Stephens and Vice-Chair Mary Cogan, local volunteers learned tools and resources needed to mobilize voters in their own communities, with hopes of securing Republican victories on the ballot.

The party said the program is used by the RNC to train “the next generation of grassroots leaders and community activists.”

“Through the RNC’s Republican Leadership Initiative, battle-tested organizers receive training similar to field staff, enabling them to establish a permanent presence in their communities year-round,” Mandi Merritt, Ohio communications director for the RNC, said.  “We are arming passionate Republicans with the skills and resources necessary to reach out to their own communities and build neighborhood teams who are equipped to door-knock, make phone calls, and register voters.”

Merritt said they have trained nearly 900 people in Ohio through the program.

The general election is set for Nov. 6.

Ohio University Southern is offering a variety of community education classes to the general public. The classes are self-supporting, and... read more