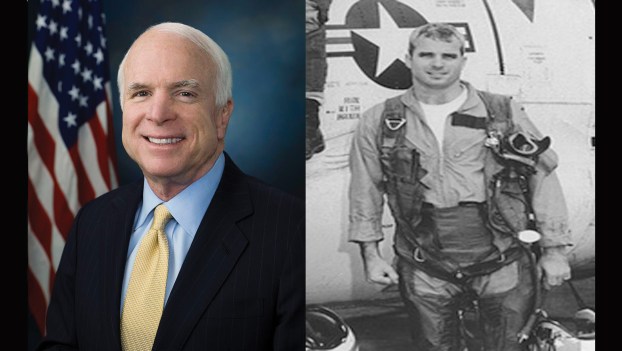 WASHINGTON — Sen. John McCain, who faced down his captors in a Vietnam prisoner of war camp with jut-jawed defiance and later turned his rebellious streak into a 35-year political career that took him to Congress and the Republican presidential nomination, died Saturday after battling brain cancer for more than a year. He was 81.

McCain, with his irascible grin and fighter-pilot moxie, was a fearless and outspoken voice on policy and politics to the end, unswerving in his defense of democratic values and unflinching in his criticism of his fellow Republican, President Donald Trump. He was elected to the Senate from Arizona six times but twice thwarted in seeking the presidency.

Ohio Gov. John Kasich, who served with McCain as a Republican in Congress and has become known for a similarly independent streak, recalled his friendship with the senator.

“Karen and I join the nation, and so many around the world, in mourning the death of Senator John McCain, an iconic American hero, patriot and statesman without compare,” Kasich said in a statement. “Few have served their country so well or for so long. Having been privileged to call John a friend over many years, I will miss his straight talk and unfailing good humor, his steadfast resolve and absolute devotion to public service. I will miss my old friend.”

“John McCain was an American hero who embodied our nation’s most cherished values: service and sacrifice,” Brown said in a statement. “He was a leader to senators from both parties, a touchstone on foreign and domestic issues. Just as importantly, he made no secret of his love for his wife, Cindy, and his family. Connie and I are thinking of them now. May their memories of this great man sustain them.”

Earlier this month, following the passage of the John S. McCain National Defense Authorization Act, Brown delivered a speech on the Senate floor in honor of McCain.

“John McCain was a true patriot who lived the motto of his 2008 campaign: Country First, Always,” Portman said. “He was also a friend and someone I looked to for counsel. In the Senate, we relied on his expertise on national security issues, were inspired by his life’s story, and charmed by his sense of humor. He was a lion of the Senate, and the place will not be the same place without him. Jane’s and my prayers are with Cindy and the entire McCain family during this difficult time.”

An upstart presidential bid in 2000 didn’t last long. Eight years later, he fought back from the brink of defeat to win the GOP nomination, only to be overpowered by Democrat Barack Obama. McCain chose a little-known Alaska governor as his running mate in that race, and turned Sarah Palin into a national political figure.

After losing to Obama in an electoral landslide, McCain returned to the Senate determined not to be defined by a failed presidential campaign in which his reputation as a maverick had faded. In the politics of the moment and in national political debate over the decades, McCain energetically advanced his ideas and punched back hard at critics — Trump not least among them.

Obama, whom McCain had requested speak at his funeral, along with another former campaign rival, former President George W. Bush, recalled their history.

“John McCain and I were members of different generations, came from completely different backgrounds, and competed at the highest level of politics,” Obama said in his statement. “But we shared, for all our differences, a fidelity to something higher-the ideals for which generations of Americans and immigrants alike have fought, marched, and sacrificed. We saw our political battles, even, as a privilege, something noble, an opportunity to serve as stewards of those high ideals at home, and to advance them around the world. We saw this country as a place where anything is possible – and citizenship as our patriotic obligation to ensure it forever remains that way.”

Obama spoke of McCain’s time as a prisoner of war during Vietnam.

“Few of us have been tested the way John once was, or required to show the kind of courage that he did,” Obama said. “But all of us can aspire to the courage to put the greater good above our own. At John’s best, he showed us what that means. And for that, we are all in his debt. Michelle and I send our heartfelt condolences to Cindy and their family.”

McCain’s daughter, Meghan, who has established a career as a media commentator since her father’s 2008 run, released a statement to the public.

“My father is gone, and I miss him as only an adoring daughter can,” she said. “But in this loss, and in this sorrow, I take comfort in this: John McCain, hero of the republic and to his little girl, wakes today to something more glorious than anything on this earth. Today the warrior enters his true and eternal life, greeted by those who have gone before him, rising to meet the Author of All Things: The dream is ended: this is the morning.”

The scion of a decorated military family, McCain embraced his role as chairman of the Armed Services Committee, pushing for aggressive U.S. military intervention overseas and eager to contribute to “defeating the forces of radical Islam that want to destroy America.”

Asked how he wanted to be remembered, McCain said simply: “That I made a major contribution to the defense of the nation.”

— The Associated Press contributed to this report