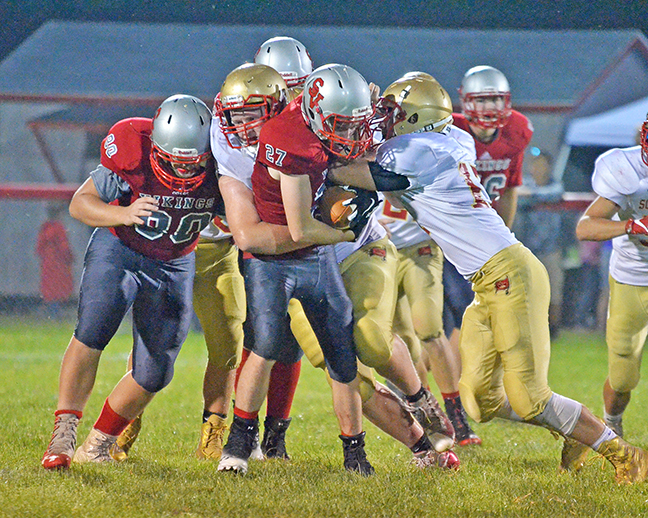 WILLOW WOOD — Ugly wins look a whole lot better than a pretty loss. Just ask the Symmes Valley Vikings.
South Gallia dominate the statistics but it was the Vikings who made the big defensive plays in a 14-12 win on Saturday in the season opener.
“It wasn’t pretty, but our kids played hard,” said Vikings’ coach Rusty Webb.
“Both teams had opportunities. Defense and special teams held us in the game.”
In the time of possession, South Gallia had the ball 33:20 while the Vikings kept the ball for just 14:40 of the 48-minute contest.
The Rebels also had 351 total yards — 301 on the ground — to just 95 total yards for the Vikings. South Gallia had a 23-4 advantage in first downs.
Symmes Valley scored less than two minutes into the game.
Derek Crum hit Jack Leith with a halfback pass to set up a 4-yard scoring run by Nick Stow and the Vikings led 6-0.
On the first play following the ensuing kickoff, the Vikings’ Josh Ferguson stripped the football and returned it 35 yards for a touchdown.
Keifer Wilson threw to Ryan Lewis for the conversion.
The Rebels had their next drive stall and the Vikings blocked the punt. Symmes Valley drove inside the 10 only to fumble at the one-yard line.
South Gallia went on a time-consuming 19-play, 88-yard drive capped by Kyle Northrup’s 10-yard scoring run with less than 30 seconds in the half.
The conversion run failed.
“We had the momentum early and South Gallia was able to get the momentum back. We went in at halftime and our kids regrouped. I was very pleased with how our kids were able to handle the adjustments. You worry about that with a young team. Our kids showed a lot of guts,” said Webb.
“They were driving to start the second half and Gabe Smith came up with a fumble recovery. After that it became a field possession game and we were able to keep them pinned deep.”
South Gallia did get another scoring drive going in the third quarter and ended on a 2-yard touchdown run by Jeffrey Sheets.
However, on the important conversion play, Leith stripped the ball and recovered to end the game-tying effort.
The Vikings’ defense appeared to have another score when Ferguson sacked quarterback and caused a fumble that the Vikings returned for a touchdown only to have the play erased due to a penalty.
South Gallia 0 6 6 0 = 12
Sym. Valley 14 0 0 0 = 14
First Quarter
SV — Nick Strow 4 run (kick failed)
SV — Josh Ferguson 35 fumble return (Ryan Lewis pass from Keifer Wilson)
Second Quarter
SG — Kyle Northrup 10 run (run failed)
Third Quarter
SG — Jeffrey Sheets 2 run (run failed)
——
SG SV
First downs 23 4
Rushes-yards 46-301 24-57
Passing yards 50 38
Total yards 351 95
Cmp-Att-Int 7-19-0 6-8-2
Fumbles-lost 4-2 3-3
Penalties-yards 15-120 9-65
Punts-average 4-5.0 3-27.0
Individual Leaders
RUSHING —South Gallia: Kyle Northrup 17-121, Jeffrey Sheets 12-90, Jacob Birtcher 7-68; Symmes Valley: Josh Ferguson 5-22, Derek Crum 3-1, Keifer Wilson 7-6, James Newcomb 5-14, Nick Strow 4-14.
PASSING — South Gallia: Tristan Saber; Symmes Valley: Keifer Wilson 5-7-2 25, Derek Crum 1-10 13.
RECEIVING — South Gallia: Kyle Northrup 3-12, Jeffrey Sheets 3-30, Saunders 2-12; Symmes Valley: Jack Leith 4-33, Nick Strow 1-5.