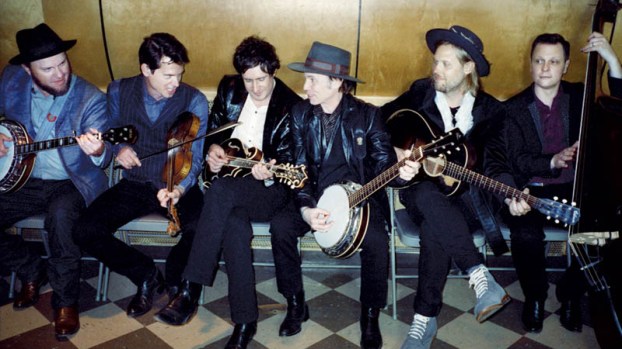 American roots band Old Crow Medicine Show with lead singer and founder Ketch Secor, second from left, will perform at the Paramount Art Center on Sept. 9. The band is well-known for their song “Wagon Wheel.”

Wheeling into the Paramount

ASHLAND — Ketch Secor, fiddle player and lead singer of the Old Crow Medicine Show, believes divine intervention may have helped the band along their 20 year history.

They will be bringing their brand of American roots music to the Paramount Arts Center in Ashland, Kentucky on Sept. 9 in support of their latest album, “Volunteer.”

The American roots band was discovered two decades ago while busking on the streets by none other than Doc Watson, a musician famous for his knowledge of traditional American music and his guitar playing style.

“This is the kind of chance encounter that lends to this theory there was some divine intervention with the Old Crow,” Secor said. “It happened with Doc, it happened with Marty Stuart, Gillian Welch, Willie Nelson. There are so many people that we were loved and inspired by with whom we crossed paths with during the infancy of the band. These performers played vital roles in our career.”

The band was busking on a corner of King and Depot streets in Boone, North Carolina when a woman came up and said her dad would love their music and asked them if they would still be there in about an hour.

“We didn’t think anything about it because we didn’t know who her dad was,” Secor said.

An hour later, the woman returned as promised with her dad.

Dad turned out to be Doc Watson. Turns out they were playing the same spot that Doc had, some 50 years before.

He offered them a gig and helped launched their career.

“It was a tectonic shift for us, getting the stamp of approval from Doc when we were 21 years old and busking,” Secor said. “

The song was written when Secor and his friend, Chris “Critter” Fuqua, were in high school and were “just giddy about Bob Dylan,” Secor said, adding their love of Dylan was the cornerstone of their friendship and influenced all their work as musicians.

Critter got a copy of a Dylan bootleg that contained outtakes from his 1973 soundtrack work for the movie “Pat Garrett and Billy the Kid.” One of the unfinished tracks, “Rock Me Mama,” stuck in the teenaged Secor’s head and he wrote a song around it.

“I couldn’t get it out of my head,” Secor said. “I heard Bob mumbling ‘rock me, mama, like a wagon wheel’ and I knew I had my chance for greatness.”

Secor got a co-writing, and copyright-sharing agreement with Dylan and “Wagon Wheel” appeared on Old Crow Medicine Show’s self-titled first album in 2004.

The song, which describes the journey of a man hitchhiking from New England to North Carolina to see the love of his life, has become one of their signature songs and was certified platinum in 2013.

It was also a blueprint of sorts for Secor with the line “I was born to be a fiddler in an old time string band,” which is essentially what Secor does for a living.

A version of “Wagon Wheel” by Darius Rucker reached number one on the Hot Country Songs chart in March 2014.

With their love of old American music in all its forms, Old Crow Medicine Show ends up playing at bluegrass festivals, country music venues and have been inducted into the Grand Ole Opry.

Secor said he has an attraction to Eastern Kentucky and its Appalachian music and has played in the Tri-State area often in the past two decades. He said eastern Kentucky is unparalleled for its American music contributions, including Loretta Lynn, Dwight Yoakum, the Judds and dozens more.

“We’ve played in Kentucky a lot,” he said. “We’ve played several times at Hillbilly Days in Pikeville, we’ve played in Ashland, Huntington, Parkersburg. It is a landscape that a lot of our musical inspirations stem from. It’s a place where the fiddle and the banjo really, really have a home place.”

2008 Republican presidential nominee dies at 81 WASHINGTON — Sen. John McCain, who faced down his captors in a Vietnam... read more