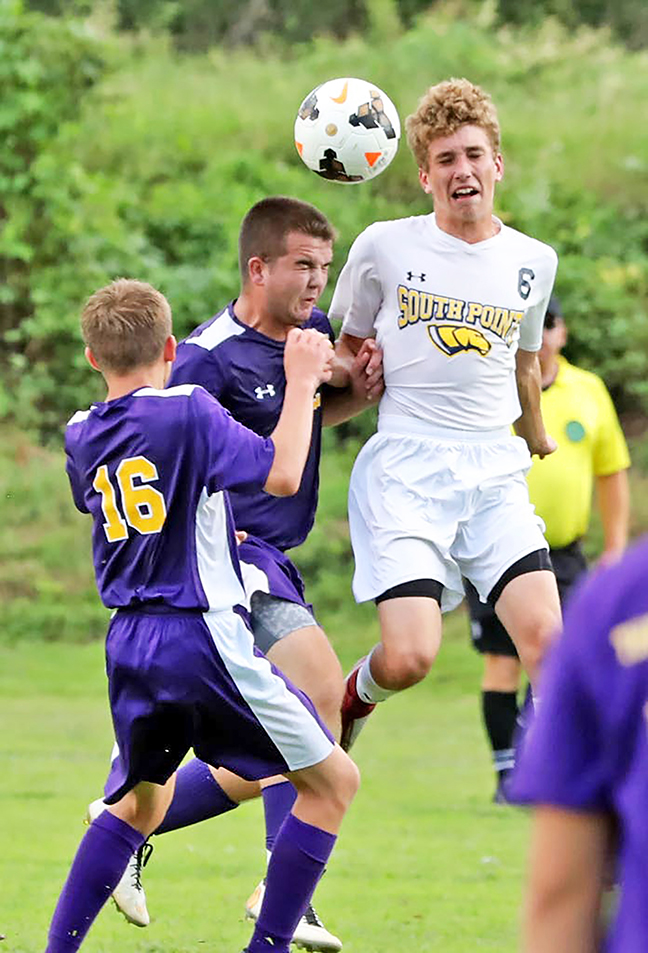 St. Joseph Flyers’ Chase Wilds (left) uses his head to hit this shot during Thursday’s soccer game. Although Wilds made the hit, South Point’s Luke Tyree (6) got the winning goal as the Pointers won 3-2. (Photo Courtesy of Tim Gearhart)

Fortunately for the South Point Pointers, they had one time when there was no answer.
Each time the Pointers scored a goal, the St. Joseph Flyers answered until late in the game as South Point got a 3-2 soccer win on Thursday.
“We came out strong in both halves and they were quick to answer. We were very fortunate to come out of there with a win. Both teams played hard,” said Pointers’ coach Zane Joy.
Marquise Yancey scored off an assist from Tyler Lilly just three minutes into the game. St. Joseph answered with a goal by Ethan Sheridan and an assist from Isaac Whaley to tie the game at the half.
Drew Smith got an unassisted goal early in the second half, but the Flyers answered one minute later as J.C. Damron scored at the 46-minute mark with an assist from Dmitri Ward.
The Pointers scored the deciding goal with 71 minutes on the clock when Luke Tyree put the ball in the net with an assist from Seth Anderson.
Pointers’ goalkeeper Jaylon Hatfield had seven saves while the Flyers’ Jimmy Mahlmeister had 14.
South Point had 23 shots with 17 on goal, two corner kicks, three offsides penalties and seven fouls.
St. Joseph (3-1) had 25 shots with nine on goal, four fouls, one offside penalty and 10 corner kicks.
South Point visits Chesapeake on Tuesday with the girls’ game at 5:30 p.m. and the boys at 7:30. St. Joseph visits Cheapeake on Wednesday.
South Point 1 2 = 3
St. Joseph 1 1 = 2
First Half
SP — Marquise Yancey (Tyler Lilly assist) 3:00
SJ — Ethan Sheridan (Isaac Whaley assist) 24:00
Second Half
SP — Drew Smith (unassisted) 45:00
SJ — J.C. Damron (Jared Johnson assist) 46:00
SP — Luke Tyree (Seth Anderson assist) 71:00
Saves—SP: Jaylon Hatfield 7; SJ: Jimmy Mahlmeister 14

CINCINNATI (AP) — For the second year in a row, the Bengals lost a backup quarterback in the final preseason... read more