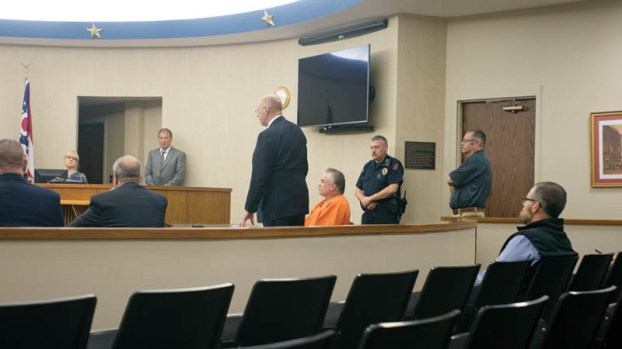 A man accused of murder pleaded not guilty and had his bond set at $1 million on Friday morning.

James W. Moore, 49, of 555 Township Road 252, Ironton, was in the Lawrence County Courthouse on Friday morning in the courtroom of Lawrence County Common Pleas Judge  Andy Ballard, although the presiding judge was Donald Capper.

At the beginning of the hearing, Capper explained that the arraignment was being held in the Ironton courthouse, rather than the Lawrence County Municipal Court in Chesapeake because of security concerns.

“We thought it was more secure to have him arraigned here,” Capper explained. There were six bailiffs and sheriff’s deputies in the courtroom, although there were only three people in the seats for the public.

Moore did not speak during the arraignment, instead allowing his attorney to enter a not guilty plea on his behalf.

When asked what the state position was on bail, Anderson recommended a $1 million cash or surety bond.

“This individual is charged with murder at this point, although we do anticipate additional charges after this case is presented to the grand jury,” he said. The grand jury is expected to convene in the third week of September.

“Considering the nature of this crime, we feel that $1 million is appropriate.”
Davenport requested a lower bond.

“We personally requested a property as a possible method of posting bond,” he said. “His family is trying to determine what property they have available to post his bond. But we don’t know yet.”

Capper set the bond at either $1 million cash or surety or $2 million property bond.

Around 11:35 p.m. Monday, the Lawrence County Sheriff’s Office got a call about a possible shooting at 555 Township Road 252. When deputies arrived, they found a man lying dead just outside the residence from apparent gunshots to the upper torso. The man was identified as Homer Fred Crank, 42, address unknown.

Moore told deputies that Crank, an acquaintance, had come to his house and a disturbance ensued. Moore was detained and the handgun was recovered from him. He was later arrested on a felony murder charge.

Davenport also told the judge that Moore has very high blood pressure and that he had not had his medication since Tuesday and hadn’t been seen by a doctor.

“He’s concerned for his health,” the lawyer said.

Anderson said that it was his understanding that Moore had been seen by the jail doctor and been given medication, but he would verify that with the sheriff’s office.

Davenport also made a motion for Moore’s mother to be able to go into his home and collect cash that is there as well as civilian clothes for his next hearing.

“I’m sure the media will be here and I would like him to not be pre-judged based on the fact that he is wearing a jumpsuit and chains,” he said.

Anderson said there was no objection to Moore wearing civilian clothing at the hearing.

Davenport also asked that if the state was done searching the house, the family would like to secure the residence.

Anderson said they were not ready to release the house since it was the scene of the crime, an active investigation is still ongoing and that they have done two search warrants on the house since Monday.

Davenport asked if Moore’s mother could be escorted into the house to retrieve the clothes and cash.

Anderson said he would speak to the investigator, Lawrence County Sheriff’s detective Sgt. Aaron Bollinger, and have him or another officer escort his mother in. But he added that they would document the process.

“I think that is a reasonable resolution to that,” Capper said.

Sentencing set for next week; also facing another trial in additional case A South Point man was found guilty on... read more