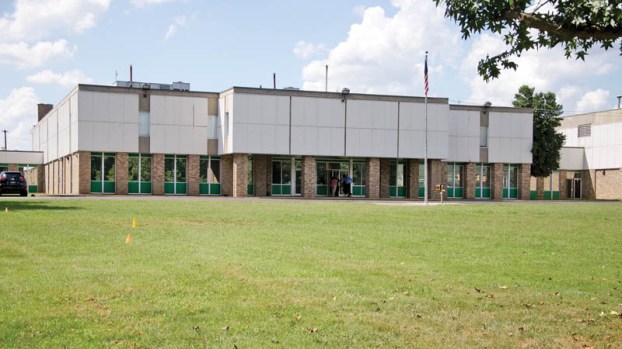 Green High School was built in the early 1970s. The district is seeking to build a new preschool-through-12th grade facility if voters approve a bond issue on the fall ballot.

Bond would aid in funding

FRANKLIN FURNACE — Green Local Schools are home to about 600 students, from kindergarten through high school seniors.

The two buildings are now decades old — the elementary school was constructed in the late 1960s and the high school in the early 1970s — and school officials are hoping to secure funding for what they say is a much-needed upgrade.

“The Green Local School District has been given an incredible opportunity to go to the ballot to pass a bond issue for the construction of a new Preschool-Grade 12 academic facility and several other athletic/extracurricular complex improvements,” superintendent Jodi Armstrong said.

She said the current share of the cost breaks down as 71 percent state and 29 local.

“In other words, the State of Ohio will pay 71 percent of the allowable cost of the build, while taxpayers will work together for the remaining 29 percent,” Armstrong said. “This is the best shared cost scenario the district has had in recent memory. The most recent Emergency Operating Levy has expired. As a result, the bond issue will not be assessed at the same time as another school levy.”

On Tuesday, Armstrong, along with district treasurer Brodie Merrill, stopped by Beth Smith’s journalism class at the high school, where the two took questions from students on the issue.

Students asked about factors such as the size and safety of a new facility, while also inquiring as to why Green was the last district in Scioto and Lawrence counties to get a chance to build a new facility.

Armstrong told them things are based on a formula from the state, which takes into account population and other facts over the last 10 years.

She said it would cost $18 million to upgrade the existing buildings to meet standards, as opposed to $11 million for a new facility, which would also include new sports facilities.

“We already have great things here with the old school,” he said. “Can you imagine what we could have with a new school? We have great students and staff. I’t’s by far the best school I’ve ever been in. We have everything great. All we need is a new school.”

Armstrong said the opportunity comes at the perfect time, as the schools are facing the need for improvements to current facilities in the near future.

“We would have to go to the taxpayers in the form of a levy to fund those costs if the bond issue would fail,” she said.

She said, as per the Ohio Facilities Construction Commission assessment, recommendations include, but are not limited to basic functions and efficiency of the buildings: HVAC for Green Elementary and High School, district-wide increased electrical capacity to support our growing use of technology as an instructional resource, upgrades to the sewage system, window replacement, and roofing improvements.

“New buildings give us the opportunity to work together to design safe, creative, engaging, and efficient learning spaces with today’s safety and educational priorities at the forefront,” Armstrong said.

Merrill said the elementary school does not have central air, but each classroom has a window unit, though he said those could use improvement.

“We’ve taken care of what we have, but we need a new school,” he said, adding that they are hoeful the voters will respond to the need.

Armstrong spoke of the school’s place to locals.

“If you are familiar with the Green Local School District, you know that the school is the heart of the community,” she said. “There are amazing places of worship and family gathering areas within the district. However, the school is where we celebrate our collective history through alumni banquets and reunions; current students during open house, academic award ceremonies, band concerts, ballgames, prom and graduation; and how we will support future generations of Bobcats through 21st Century educational facilities that meet the demands of today’s academic rigors, workforce development, social-emotional needs and extra-curricular opportunities.”

The district hosted an series of informational meetings on Friday and Tuesday to help provide details to parents and community members. The general election is Tuesday, Nov. 6.