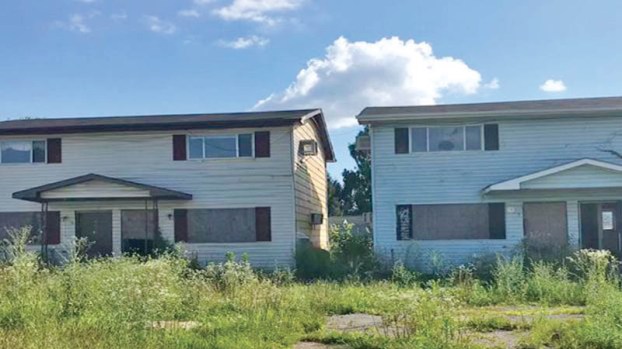 The Otter Property, a former apartment complex on North Kenova Road in South Point, will be demolished by the Lawrence County Land Bank on Monday.

“Finally,” he said of the long-sought demolition. “How long have we been working on this?”

Gaskin said he will be taking the day off work, and hopes to set up a tent or shelter across the street. He invited the public to come by and watch the complex come down.

The council also heard from Katrina Anson, owner of Trinity Cheer and Dance, who is seeking the use of the former South Point Elementary School building to host her business and give the team a home and practice space.

The building, owned by Joe Freeman, is in an area zoned for residential use and certain types of business and Freeman had applied for a variance to the zoning ordinance to allow Trinity to use the building.

Anson said Freeman has agreed to allow the team to use the building, rent free, until they can get established. Trinity is comprised of children and teens from a recently-closed Ironton gym.

The council denied the request for the variance, and Anson had an appeal ready to file on Wednesday.

Gaskin told Anson that she would be notified of the date of an appeal hearing and that residents of the neighborhood must be contacted once a date is set.

Gaskin said that zoning ordinances are intended to preserve the character of a neighborhood and determining what uses are compatible with an area.

Anson was accompanied by Sarah Carver, whose husband partners with Freeman for a business, Quality Care Nursing, which already operates out of the former school.

Carver, who is a paralegal, had a presentation ready for council on the matter, but she was advised by village solicitor Randy Lambert that this should take place during the appeal hearing, which is set aside for such matters.

“Whatever you present needs to be done in the public hearing,” he said.

Gaskin said that the issue of the former school had come up before several years prior, in which Freeman was granted use for his business.

He said that it had been a contentious issue at the time and that the crowd was “standing room only” of about “50 to 60 people.”

Carver said she had spoken with residents adjacent to the former school, and she said most were in favor of allowing Trinity use of the building.

Gaskin reminded her that the ordinance affected not just adjacent residents, but the entire neighborhood, who must be notified and allowed a chance to comment.

Carver asked the council and mayor to have an open mind about the matter.

“And we will, at the hearing,” Gaskin said.

The mayor said he expects the hearing will probably take place on the same day as the next council meeting, but a date would be finalized and announced shortly.

The council also heard from village administrator Russ McDonald, who said work on replacing clarifiers on the sewage system is continuing.

He said one of the four clarifiers is 90 percent finished and is set for a Sept. 18 startup. He expects the project, which had encountered some delays due to parts issues, to be completed by the end of December.

McDonald also said the water department had received a $10,000 grant from the Environmental Protection Agency for asset management, which will go toward maintain vital parts for the system.