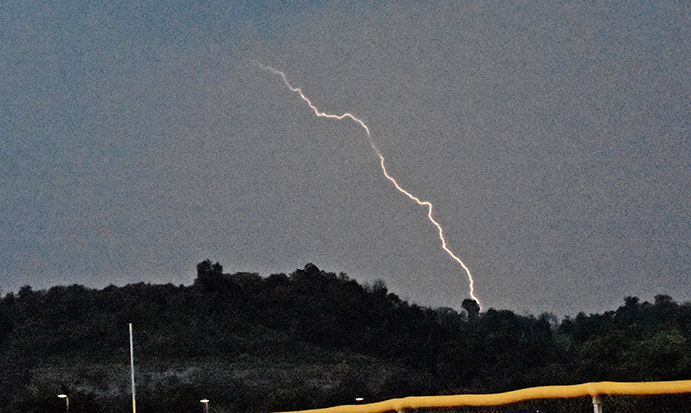 A familiar sight during Friday night high school football games was lightning that forced games to be postponed, shortened and rescheduled. This lightning bolt was seen in Proctorville at the game between Ironton and Fairland. The two teams will meet at 5 p.m. on Saturday. (Kent Sanborn of Southern Ohio Sports Photos)

There’s nothing you can do about the weather. Just ask area football teams.
Lightning and thunder played havoc with the area football games on Friday night. Some games started and were forced to stop. Others never got started.
The end result was games being rescheduled for Saturday.
Rock Hill and Oak Hill made it to the second quarter before being stopped.
The Oaks took a 7-0 lead on a 3-yard run by Walker Smith with 4:23 left in the first quarter.
Rock Hill fumbled on its next play and the Oaks took advantage to go 38 yards for a score as Bayley Clutters ran one yard on the first play of the second quarter and it was 14-0.
The Redmen answered with a drive to the Oaks 1-yard line when lightning struck.
The game will resume at 7 p.m. on Saturday.
Many teams didn’t want to play too late because some students were scheduled to take the ACT tests on Saturday morning.
The Ironton at Fairland game will be played at 5 p.m. Saturday. There will be no admission charge.
Symmes Valley at Chesapeake will play at 2 p.m. on Saturday while Alexander at South Point will be played on Monday evening.
Coal Grove at Portsmouth West was delayed due to the weather but the teams resumed with West winning 21-14.
After a 0-0 first half tie, both teams scored in the third quarter and it was 7-7.
Garrett Hurd ran 21 yards for a touchdown with eight minutes left to make it 13-7 West. But Austin Stapleton bolted 51 yards for a touchdown with 7:46 left and Evan Holmes conversion kick put the Hornets up 14-13.
West (3-0) came back witha 50-yard, nine-play drive capped by Hurd’s 9-yard scoring run and it was 19-14 with 2:47 left. Dylan Bradford ran for the conversion and a 21-14 lead.
The Hornets (2-1) had one final possession but Bradford intercepted a long pass at the Senators’ 41 to seal the win.

CINCINNATI (AP) — The Reds tied their club record for grand slams on July 1 and figured it wouldn’t be... read more