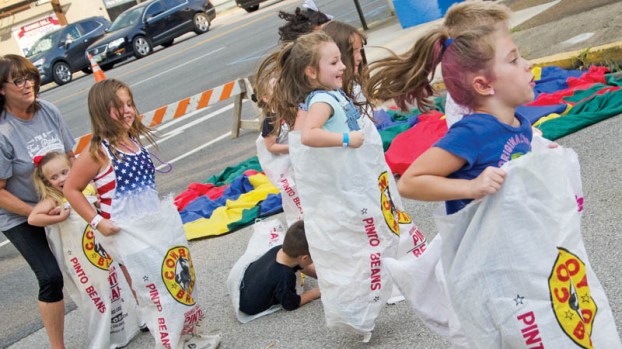 ASHLAND — Summer ends in less than two weeks and, for the final First Friday of this season, Ashland in Motion centered the monthly block party around area Girl Scouts.

In addition to the usual car show, inflatable’s and musical entertainment on Winchester Avenue, the Scouts took over one of the downtown side streets and hosted their fourth annual block party.

The Kentucky Wilderness Road Council represents scouts from counties in eastern Kentucky and Lawrence County and they offered booths and games, such as sack races, at Friday’s event.

Karen Conn, membership specialist for the council, said it helps to raise awareness of scouting.

“It helps with recruitment, and it’s a fun activity,” she said, adding that Ashland in Motion had provided 200 badges to give out, in addition to allotting them space. “And they’ve given us this whole street.”

Music for the evening was provided by Larry Pancake and the Sugarbeats, a band from Kentucky.

One of the group’s singers, Whitney Lee Hodges, was hoping the rain would hold off as she tuned up for the performance, performing Jewel’s “Who Will Save Your Soul” as she waited for the rest of the band.

Music was also offered by the Aspire Conservatory, of First United Methodist Church, who set up two pianos on Winchester, where 33 students in their program played for the crowds.

Several groups were set up along the way, such as the El Hasa Shriners, who had an antique car on hand, and the Green Dot Initiative, a violence intervention program.

While summer may be winding down, there is one more First Friday in the works.

First Fright-Day, a Halloween-themed event, is set for 5-9 p.m. Oct. 5 and will feature a downtown trick-or-treat and music by the Julie Reeves Band.