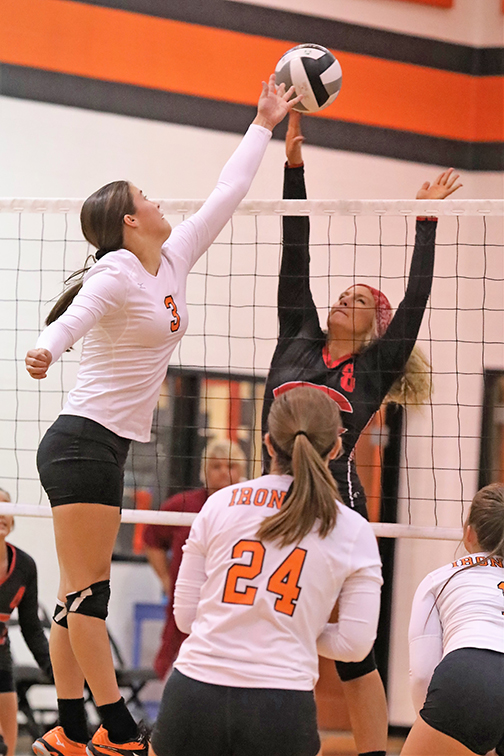 Riley Schreck decided to play rally killer.
The Ironton Lady Fighting Tigers won the first two sets of their Ohio Valley Conference volleyball game against the Coal Grove Lady Hornets on Wednesday.
Ironton easily took the first two 25-14 and 25-10, but the Lady Hornets came to life and began to fight back as they built a 21-15 lead.
Schreck then stepped to the serving line and ran off nine straight points as Ironton took a 24-21 lead.
Coal Grove then scored three straight to tie the game but the Lady Tigers scored the next two points to win the set 26-24 and the game 3-0.
“I believe the girls are learning to play when the momentum is on their side,” said Ironton coach Beth Campbell. “They had to grow up quickly with no seniors on the teams, looking for guidance and experience on the floor.
“The girls are progressing and play more in sync and are recognizing the effort and attitude in their progression of being a better team.”
Ironton (3-5, 3-3) was led by Lydia Hannan with 13 points including six aces. Schreck finished with 11 points and four aces while Demi Sands had nine points, M’Kenzie McMaster eight points including seven aces, and Marybeth Burton seven points.
Offensively, Schreck and Burton had seven kills each with Hannan and McMaster five apiece.
Peighton Rowe and Kameren Arden combined for 28 setting assists. Demi Sands led Ironton with 10 digs.
Kayleigh Murphy had seven points and Haley Booth five to pace Coal Grove.
In the jayvee game, Ironton won 22-25, 25-20 and 25-20.
Keegan Moore led both teams with 13 points including six aces. Sidney Douglas had 11 pionts with eight aces, Devin Forest had eight points, Emily Campbell four, and Kaylee Blankenship and Kayleigh Colins three each.
Emily Carpenter scored 11 points, Rylee Harmon seven and Maddie Hensley six to pace Coal Grove.
On Monday, Ironton lost a tough four-set game at Raceland, 18-25, 25-18, 24-26 and 18-25.
McMaster had 10 points, Burton nine, Schreck eight and Sands five.
Offensively, Hannan had eight kills, Schreck seven and both McMaster and Burton five each. Arden had 17 setting assists and Rowe 10. Sands had 12 digs.
Maddie Whaley had 17 points and Zoey Short 15 for Raceland.
Ironton won the jayvee game in three sets, 9-21, 21-13 and 26-24.
Campbell had eight points followed by Moore with seven while Forest and Reyes Wilson five each.
Ironton visits South Point at 5:30 p.m. Thursday.