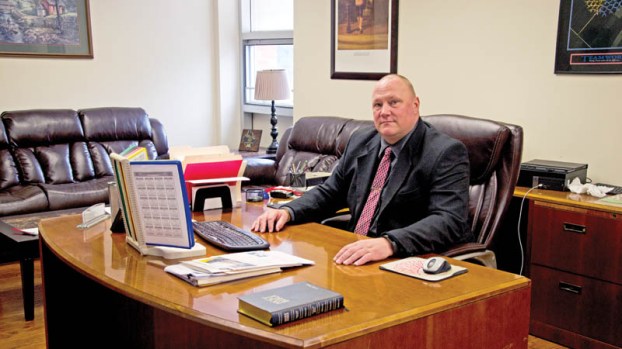 David Hopper, the new superintendent for Rock Hill Schools, has been on the job since Aug. 1, after taking over for Wes Hairston, who retired after three decades of work in the district. Hopper served as principal at Rock Hill High for seven years and assistant principal of the middle school for one year.

David Hopper has been on the job as the new superintendent of Rock Hill Schools since Aug. 1, and he says things are going well so far.

He said one thing he has learned since taking over leadership in the district is just how involved the job is and all the aspects it covers.

“You’ll meet with lawyers, workers comp, unions and more in just one day,” he said.

Hopper, who previously served as the principal of Rock Hill’s high school and assistant principal of the middle school, is a Hanging Rock native.

“I’m from the community,” he said, noting that he graduated from high school in 1989 and then went to Lincoln Memorial University in Tennessee on a full basketball scholarship before returning to southern Ohio.

He outlined his plans for the district, which serves 1,400 students between the elementary, middle and high schools.

“It’s a three-prong approach,” he said.

First he said he wants to focus on security, which he said is already a priority for the schools.

“We have pretty strong safety here,” he said. “We want to enhance that.”

Second, he said he wants to increase collaboration among the schools.

“Across the district, I want to connect building to building,” he said. “Get conversations happening and talking among the teachers and staff.”

And, third, he said he wants to take a look at student performance.

“Take a look at the tools we have and see if they’re adequate,” he said. “Look at all grade levels and review what we need and what programs are there to help us.”

Hopper said his goals will become more evident “once the dust settles” from the change and he had high praise for his predecessor, Wes Hairston, who retired after nearly 40 years in the district, including nine years as superintendent.

“He empowered us across the district to do our jobs,” Hopper said of Hairston. “Overall, the district is in great shape and, taking over, we’re ready to roll.”

Included structures 117, 118 and 119 for entity SOUTH POINT — The eyesore that was the Otter Property apartment complex... read more