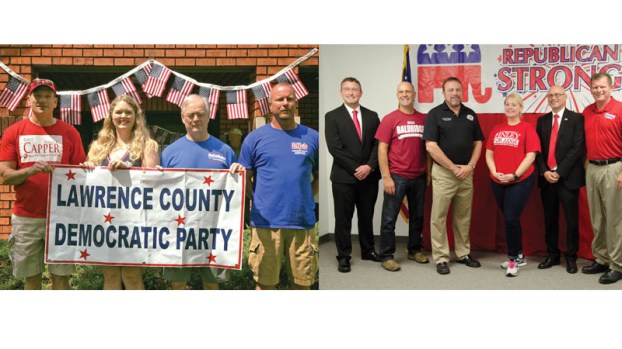 Gubernatorial candidates to make visits to Lawrence County on Sept. 22

With the Labor Day holiday out of the way, election season is beginning to heat up and Lawrence County will see the top candidates in the state make stops in the region next  weekend.

Democratic gubernatorial candidate Richard Cordray will visit Ironton on the morning of Sept. 22, while his Republican opponent, Mike DeWine, will appear in the county with his running mate, Jon Husted, later in the day.

Cordray will speak at an event, organized by the Lawrence County Democratic Party, in the Maines Rotunda at Ohio University Southern, which will run from 11 a.m.-2:30 p.m., according to John Ferguson, the party’s deputy chair in the county. The event is free and open to the public.

DeWine and Husted will speak at a an ox roast fundraiser for the Lawrence County Republican Party, which will run from 5-7:30 p.m.

Mike Dyer, who represents the DeWine campaign in the county, said the event will be ticketed and describes it as “historic.”

“It’s the first time both the governor and lieutenant governor candidates will be at the same event in the county,” he said.

Those interested in attending the event, which will also feature food and a live band, can purchase tickets at the Lawrence County Republican Headquarters, located at The Hills shopping plaza in Ironton or get more information at lawrencecountyohiogop.org.

Directions to the farm location for the event will be included with tickets.

Tickets will also be on sale at Myers, Neville and Finley law firm in Chesapeake and South Point Storage, according to party treasurer Mary Cogan.

The parties have both opened their new campaign headquarters for the season.

The Republican cut the ribbon on their location, between Merle Normand and AT&T at the shopping center on Monday.

Several local officeholders were in attendance, such as Brigham Anderson, who voiced his opposition to Issue 1 on the general election ballot, which would ease penalties for drug crimes.

Anderson said, if passed, the measure would hinder efforts in the county to battle the addiction epidemic and said it is opposed by those in law enforcement in the state. The party’s executive committee voted unanimously to oppose the ballot measure.

The county’s Democrats hosted their ribbon cutting last week at a location in Burlington near Lowe’s and Walmart, Ferguson said.

For voters, there will be two opportunities to hear from candidates and find out more on their stances in coming weeks.

Local and regional candidates are invited to take part and the event is free and open to the public, Ed Moellendick, the president of the group said.

On Oct. 23, The Tribune will host a candidate forum at Ohio University Southern in the Bowman Auditorium. The event, which will begin at 7 p.m., is extended to candidates for common pleas judge, county commissioner and auditor. The event is free and open to the public.

The general election in Ohio is set for Tuesday, Nov. 6.

New Rock Hill superintendent hopes to build on district’s successes David Hopper has been on the job as the new... read more