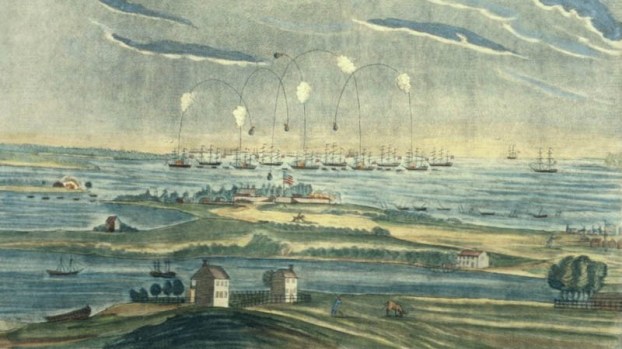 This illustration from the 1800s depicts a view of the bombardment of Fort McHenry, near Baltimore, by the British fleet on the morning of Sept. 13, 1814.

‘Is the flag still there?’

Origins of U.S. national anthem lie in War of 1812

After defeating Napoleon in Europe, a British expedition came across the Atlantic to attack the eastern seaboard of the United States in the summer of 1814.

London would now turn its full attention to the United States with Napoleon beaten. It was undecided whether the British would attack Washington, D.C. or Baltimore first.

Cockburn influenced Ross to attack the American capital first. In a few days, the British force had marched 50 miles into its enemy’s country, captured its capital, burned government buildings and returned safely to its ships, with little resistance.

The British hated Baltimore and called it “that nest of pirates,” due to its privateering activities. In September 1814, Ross, Cockburn and their 4,000 troops sailed toward Baltimore, a city of 45,000. Baltimore privateers cad captured or sunk more than 500 British ships.

Since the British decided to attack Washington first, Baltimore had time to prepare its defenses. Sen. Samuel Smith, 61, a Revolutionary War veteran, directed 16,000 men to prepare fortifications in and around Baltimore.

The city’s harbor was protected by Fort McHenry. The British strategy was to bombard Fort McHenry into submission, while Ross advanced over land from North Point to Baltimore. On Sept. 12, 1814, Ross led his men ashore and began his overland trek. The British soon ran into a force of American soldiers at Godly Wood.

The British drove the Americans off, except for Daniel Wells and Harry McComas, who had not fled. They both fired and one of them shot Ross. He called his wife’s name and fell dead.

The British were saddened at Ross’ death and his replacement proved indecisive. Baltimore would not be captured by the British overland force.

Eighteen days prior to Ross’ arrival at North Point, an important incident had occurred elsewhere.

When the British left Washington and headed back to their fleet, seven British stragglers were left behind. They located farms, looking for food and liquor and forced themselves on local women. The people of Maryland were outraged at these stragglers’ behavior.

Dr. William Beanes lived in Upper Marlborough and his farm had served as Ross’ headquarters. Beanes and his neighbors formed a committee and arrested six of the seven looters. One got away and reported what Beanes and neighbors had done. At 1 a.m. on Aug. 27, 1814, a detachment of British cavalry took the 65-year-old doctor from his bed and delivered him to the British fleet at Benedict, Maryland. Three others were reported arrested, along with Beanes.

Ross soon released the three who were with Beanes, but not the good doctor. Ross stated that Beanes would be taken to Halifax or Bermuda to be hanged, because he had been born in Scotland (charges of treason).

Mr. Richard E. West had visited his brother-in-law, Francis Scott Key, a Washington lawyer, to persuade him to help get Beanes released. Key went directly to President James Madison, who designated him as government representative to the British officers. Key took a letter to attorney John S. Skinner, who had negotiated exchanges of prisoners before this incident.

They would now approach Ross and Cockburn.

On Sept. 7, 1814, Key and Skinner found the British fleet near the mouth of the Potomac River. They went aboard the Tonnant to parlay with Ross and Cockburn. The officers refused to let Key give Beanes the package of soap and clean clothes they had brought him.

Key produced letters from wounded British soldiers who were being cared for by Americans and Ross softened his attitude and eventually agreed to release Beanes.

The British, however, would not release Beanes, Skinner and Key then, because they were about to attack Baltimore and feared the Americans would divulge their strategy. The three Americans were placed aboard the Minden until the assault was over.

The attack was to begin on Sept 13, 1814, a Tuesday. The British fleet began to bombard Fort McHenry, which guarded the water approach to Baltimore.

The fort was named for James McHenry, a Revolutionary War surgeon and U.S. secretary of war under President John Adams. The fort was of French design, a five-pointed, star-shaped fortification.

Major George Armistead commanded the 1,00-man force inside the force.
Armistead’s return fire would not reach the six British ships, two miles offshore. Cochrane, at first, did not know the Americans had sunk ships across the harbor entrance. Thus, the British would have to bombard McHenry due to the sunken ships.

The British fleet sent shells that were cast iron spheres, 13 inches in diameter and 1-½ inches thick on the outside.

The shells weighed 190 pounds each and, when the guns were elevated to 45 degrees, the shells would travel a distance of 2.38 miles.

The British bombarded McHenry for 25 hours with two slight intermissions. It is estimated 1,500-1,800 shells were hurled at the fort (150 tons of metal).

Beanes, Key and Skinner remained on deck all night, anxiously wondering about the fate of Armistead and his men. Beanes complained that he could not see McHenry’s huge flag because of the haze from the smoke of battle.

Key became irritated because Beanes kept asking, “Is the flag still there?”

At 7 a.m. on Sept. 14, the three Americans, using a spyglass, saw the flag still flying across the fort. Key was so excited, he began to write notes on the back of a letter he had in his pocket.

He was an amateur poet, but was not well known for his verse. He completed and revised his poem in Baltimore and it became known as “Defence (sic) of Fort McHenry.”

It contained four verses. The words were assigned to the music of an English drinking song,

“To Anacreon in Heaven.” Ferdinand Durang, an 18-year-old actor was the first person to sing what is now our national anthem in public.

That “Star Spangled Banner” was made by a widow, Mrs. Mary Pickersgill. It was so large, that it had to be sewn on a brewery floor. The cost of the flag was $405.90 for her labor. It took 400 yards of bunting. This famous flag was 42 feet long, 30 feet high and weighed 200 pounds. Each of its 15 stripes (Eight red and seven white) was two feet wide. This flag presently hangs at the Institute of Technology and History at the Smithsonian Institution.

The song was sung at the Battle of New Orleans in 1815 to celebrate Andrew Jackson’s victory President Woodrow Wilson ordered it played during World War I. It was designated as our national anthem by an act of Congress on March 3, 1931.

Since it is so very difficult to sing for the average American, only the first verse of four is sung.

However, each verse ends with “O’er the land of the free and the home of the brave.”

That flag is far more famous than Fort McHenry itself. During the bombardment, two buildings were damaged, 24 Americans were wounded and four gave their lives. These men — Lt. Levi Clagget, Sgt. John Clemm, Charles Messinger and Thomas Beeston – remain unknown to most Americans today!

Prior to the 1814 bombardment, whenever the flag was raised inside Fort McHenry, the ceremony occurred at 9 a.m. and “Yankee Doodle” was splayed at the flag raising.

So the British failed to take Baltimore and the attack might not have earned more than a brief notice in military history, had not that 33-year-old Washington layer, Francis Scott key, watched the bombardment.

The War of 1812 had not given Americans many military successes, but it gave them a song to sing. With government approval, the United States flag flies over Francis Scott Key’s grave at Frederick, Maryland, 24 hours a day, seven days a week.

— Bob Leith is a retired professor of Ohio University Southern and the University of Rio Grande and former teacher at Ironton High School.

FEMA is an example of socialism in action

Let’s have more socialism like FEMA. Except, it is not really socialism to build a society where individuals come together... read more