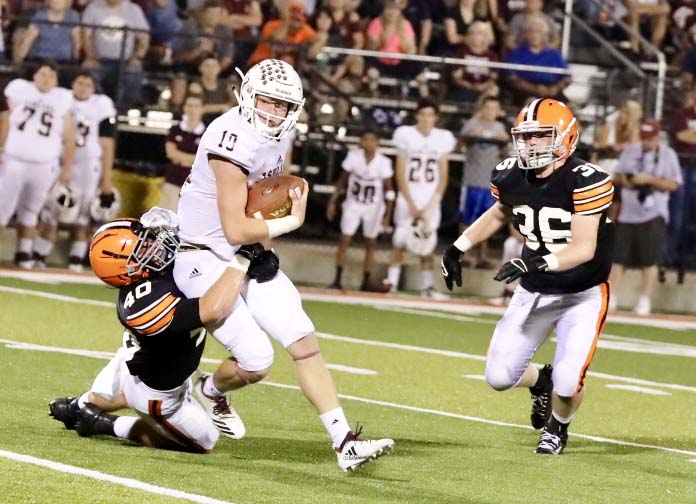 Special teams weren’t very special for the Ironton Fighting Tigers.
Two turnovers in punting situations led to a pair of touchdowns for Ashland as the Fighting Tigers fell 14-7 on Friday.
Ironton (2-2) was also plagued by fumbles as they lost three in the second half.
Ashland came into the game 4-0 and ranked No. 1 in Kentucky’s Class 4A poll, but Ironton’s defense bottled up the explosive offense by limiting them to 198 total yards.
Quarterback Braxton Ratliff was just 6-of-14 passing for 72 yards and an interception.
But Ironton’s offense was ineffective against the Tomcats’ defense. The Fighting Tigers had 174 total yards with 155 on the ground and 19 through the air.
Ashland forced a three-and-out to start the game but fumbled the punt and Cameron Deere jumped on the loose ball for Ironton at the Tomcats’ 26-yard line.
Reid Carrico got the call on the ensuing play and went the distance for the touchdown. Izack Unger kicked the conversion and Ironton led 7-0 with 10:13 on the clock.
Ironton forced an Ashland punt but the Tomcats’ defense did likewise after the Fighting Tigers’ had a drive stall at midfield.
The Fighting Tigers lined up as if to run a fourth down play, but the quick kick was blocked by the Tomcats and they took possession at the Ironton 11-yard line.
Three plays later, Blake Hester went 2 yards for a touchdown and Caleb Jackson’s kick tied the game with 1:29 left in the quarter.
Another turnover and two penalties put Ashland in scoring position, but the defense rose to the occasion.
A block in the back pushed Ironton back to its 10-yard line. On a third down play, Seth Fosson had the first down and appeared to be down, but the ball came out and Ashland recovered.
Ironton coach Trevon Pendleton argued the ball was dead and was called for a penalty to put the ball at the 9-yard line.
The Fighting Tigers forced the Tomcats to try a field goal and a penalty pushed the ball back 5 yards. Jackson’s 27-yard field goal attempt was wide left and the score remained 14-7.
Ironton answered with a drive to the Ashland 48. A fourth-and-2 resulted in a first down but a fumble and Ashland’s Steele Workman recovered.
The Fighting Tigers forced a three-and-out but got the ball back at the 21.
A 21-yard pass from Gage Salyers to Brycen Thomas got the ball to the 46, but Ironton was called for a block below the waist on a second-and-1 play and the next two plays resulted in losses of 3 and 14 yards as the ball went back to the Tomcats who took a knee twice to run out the clock.
Carrico finished with 86 yards on 20 carries.
The Fighting Tigers host South Point next Friday in an Ohio Valley Conference game.
Ashland 7 0 7 0 = 14
Ironton 7 0 0 0 = 7
First Quarter
Irn — Reid Carrico 26 run (Izack Unger kick) 10:13
Ash — Blake Hester 2 run (Caleb Jackson kick) 1:29
Third Quarter
Ash — Blake Hester 1 run (Caleb Jackson kick) 1:58
——
Ash Irn
First downs 8 10
Rushes-yards 30-124 49-155
Passing yards 72 19
Total yards 198 174
Cmp-Att-Int 6-14-1 2-6-0
Fumbles-lost 1-1 7-3
Penalties-yards 8-83 9-71
Punts-average 4-38.3 6-26.7
——
Individual Leaders
RUSHING —Ashland: Braxton Ratliff 12-44, Keontae Pittman 6-43, Blake Hester 9-38, Steele Workman 1-1, team 2-minus 2; Ironton: Reid Carrico 20-86, Seth Fosson 6-26, Cameron Deere 1-3, Gage Salyers 22-43.
PASSING — Ashland: Braxton Ratliff 6-14-1 72; Ironton: Gage Salyers 2-6-0 19.
RECEIVING — Ashland: Blake Hester 2-29, Jacob Cox 1-13, Andy Layne 1-10, Russell Rogers 2-20; Ironton: Brycen Thomas 2-19.
MISSED FIELD GOALS: Caleb Jackson, Ashland, 27 (WL)