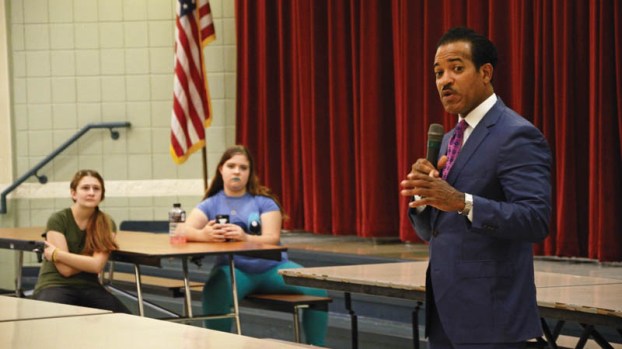 DEERING — “There’s no reason for any kid to be on drugs,” Victor Woods told the crowd gathered at Dawson-Bryant Elementary on Thursday.

“Start hammering that message. Make sure you hammer it home to your kids,” he said.
Woods, a motivational speaker, was there to speak to families about issues such as bullying, drugs and school violence.

A speaker who has appeared on CNN, FOX News, C-Span and other outlets, Woods delivered a lively presentation, urging the audience to bring about a new sense of community.

“You have to be a community that talks and listens to one another,” he said. “You need to make sure that other kids and families are doing OK.”

He said that if people knew of families where drugs were a problem with parents, they should take steps to intervene, notifying counselors, pastors and others.

On the issue of drugs, Woods said it is important for students to hear from
recovering addicts, to see the dangers and where it leads.

“There are not monsters on drugs,” he said. “There are beautiful, sensitive people who end up doing monstrous things, like stealing from their parents.”

Woods also pleaded with those in trouble to take control of their lives.

“There are beautiful people here,” he said. “You can make it.”

Woods shared his own story as an example.

As a teenager, he was caught for an armed robbery, then, following his release from state prison, he was arrested for organizing a $40 million credit card scheme and sent back to prison.

It was there that Woods said his life began to change. He credited finding his Christian faith.

Soon he was working to motivate other inmates to better themselves.

On his release, he said he told the parole officer that he wanted to write a book and become a motivational speaker, to which he was greeted with doubt, due to his felony record.

However, his book, “A Breed Apart: My Journey to Redemption” was published by Simon and Schuster and sold 75,000 copies. He said it is now being optioned for a mini series on Netflix or other outlets.

Woods told the audience that no one could stop them if they believed in themselves.

“When you become sick and tired of being sick and tired, that when you take control of your life,” he said. “Your children are watching you. What you do matters.”

Woods picked up an infant in the audience to emphasize his point, urging parents and the community to set an example and look out for one another..

Woods’ appearance at the school was part of District Family Night, which principal Angie Lafon said was open to elementary through the high school.

In addition to Woods, who was invited by superintendent Steve Easterling after hearing him at a conference, refreshments were served and inflatables were set up for younger children to play on in the adjacent gym during the presentation.

Lafon said there were also informational booths set throughout the building, such as for accelerating reading and the school’s PTO.

“And we’re helping parents get set up in the computer lab,” she said.

One of the groups set up at the event was NECCO, which offers foster care and adoptions services throughout the region, often to children in homes where parents have become  addicted.

Elizabeth Cremeans, the FCCS program director for NECCO, said they work with many school districts in the county.

“We provide mental heath services and help parents with needs,” she said of their partnership with Dawson-Bryant. “We have a team of 50 clinicians.”

Woods, whom Easterling praised for his “spirited and powerful” message, spoke at the district’s high school earlier in the day, and said he had four students stand up during his talk and tell him that they had been on the receiving end of bullying.

“And one told me that she had attempted suicide last year,” he said, stating he sat down with those who shared their stories with him and spoke with the counselor at the school about the situation.

Woods stuck around after his speech at Family Night, speaking with parents one on one and listening to concerns.

He planned to address students at the elementary school on Friday, conducting two sessions with primary and intermediate students.