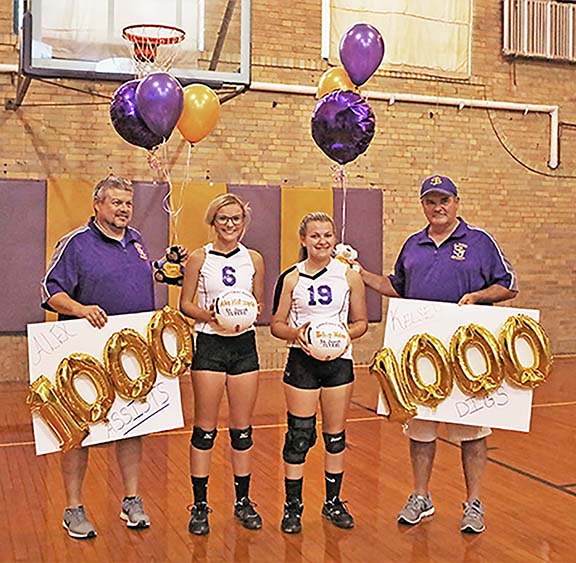 Stopping for a milestone presentation was good for Kelsey Malone and Alex Holtzapfel. Not only to recognize volleyball milestones, but it gave them a chance to catch their breath.
The St. Joseph senior girls have a hectic but fun schedule that includes volleyball and soccer in the fall, basketball for Alex and bowling for Kelsey in the winter, and softball in the spring.
They also participate in school activities such as Mock Trial, the Variety Show as well as preparing for graduation and their college future.
“It’s a lot. We have sports almost every night except Fridays, so we really don’t get much free time. But we make it work,” said Malone.
Holtzapfel said their routine has become a normal way of life.
“Normally, when we do have a day off we have practice, so we’re constantly doing that and trying to keep up with school work,” said Holtzapfel.
“Being a senior, we have all those tough decidsion you’re going to have to make. It’s hard but it’s fun. We do it for our teammates.”
The duo took a moment on Thursday to enjoy a presentation of volleyballs signifying 1,000 career digs for Malone and 1,000 career setting assists for Holtzapfel.
“I definitely couldn’t have done it without my teammates and their hard work. It was a lot of hard work and it didn’t set in until today. It was kind of nerve-racking, but I knew I could do it with the help of my teammates,” said Holtzapfel.
Malone agreed there was a lot of hard work involved, but the fun just to play overshadowed the work and the chance to help the other students was paramount since the senior class has only 18 students and the junior class seven.
“We did it to have fun for our senior year and the soccer girls get a season back together,” said Malone, noting that the Lady Flyers’ re-started their soccer team after a three-year absence.
“I wasn’t really aware of (the milestone) until the end of last season when they told me I was already over 900, so I knew I had a shot to get it this year but it’d still take a lot of work,” said Malone.
“But it didn’t really set in until today that I could really get it (Thursday) night.”
Although Holtzapfel plays four sports and Malone plays five when she fills in on the basketball team during bowling season, they both have a favorite.
“Volleyball is my favorite,” said Holtzapfel. “I played since eighth grade and I just loved it ever since.”
Although an exceptional bowler who qualified for the district tournament last season, Malone admitted that “softball is still my favorite. I really like volleyball, too.”
Athletics may currently be a huge part of their lives now, that is expected to change after high school.
“I don’t plan on playing any sport (in college) because I plan on going into law and I know that’s a lot of schooling and a lot of work. I plan on ending it after my senior year,” said Holtzapfel.
“I’m not sure in the future if I want to play sports in college or not. It depends on what I want to be and all the schooling it takes,” said Malone.
The girls know their teammates were a big part of their success, but they also directed praise to their volleyball coaches the past four years including their fathers — Bob Malone and Johnny Holtzapfel — who are the current coaches.
“We want to thank all the coach we’ve had throughout the years,” said Malone. “We had Chelsey Delong our freshman year. I didn’t play a lot of varsity that year, but Alex did to get the experience.
“We had Dwayne Johnson for two years who helped u with stuff. That’s when I played a lot of varsity. He made me a full back row player all the time and that helped me get my digs, and with (Alex) being the only setter, that’s what helped het her assists.
“We have (Bob Malone) and (Johnny Holtzapfel) who know who to get us through the season.”
And, the girls said no career would be complete without the fans.
“It’s nice being able to do it at home because we have fans who don’t daughters playing volleyball who still come and support us. It’s such a big step in a small school and for the school,” said Holtzapfel.
“We have some of the best fans,” said Malone.
It was time for Malone and Holtzapfel to take a deep breath. Volleyball and soccer season aren’t finished and the winter and spring sports still await.
But that’s no problem. They’ve got it all planned out and there’s still some time available for the prom.

Hornets big plays too much for Pointers