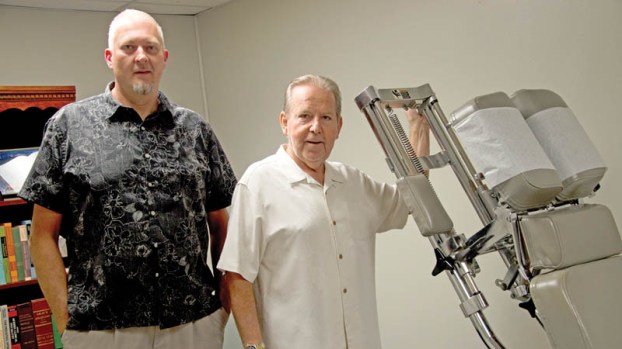 Drs. Randall Krumm, left, and Richard E. Thompson have relocated their chiropractic practice to a new location at S. Seventh St. in Ironton.

A longtime chiropractic business in Ironton has moved into a new home.

He, along with Dr. Randall Krumm and five staff members, was previously located at a facility on Sixth and Vernon Streets, which Thompson said was too big for their needs.

He said the new facility was not big enough to bring their X-ray machine, but they will contract with Our Lady of Bellefonte for that and they will be working with other local providers such as St. Mary’s Medical Center for other things.

Thompson, who was born in Lima, has operated his practice in Ironton since 1972.

“It a good community for me here,” he said. “I have no plans to retire any time soon.”

Thompson said he currently lives in the German Village neighborhood of Columbus, where has an additional location, and he makes the drive down for his days of work in Ironton every two weeks.

“I had a home in Ashland and I used to drive from here to there, but then I realized it would be easier to do it the other way,” he said.

When he is not in Ironton, the location is in the hands of Krumm, an Ironton native.

“I was born and raised here,” he said. “I went to the Ohio University in Athens, then to Cincinnati to practice,” Krumm said.

He and Thompson have worked together for 18 years.

In addition to spinal therapy, Krumm specializes in acupuncture and they location also offers rehabilitation and nutrition services.

Thompson showed the innovations in the field, including devices that hook to a computer to see movement of vertebrae.

“A lot of people are afraid to come to us,” he said of the misconceptions. “If you have problems with your car, you don’t want someone thumping around on it.”

He said the technology allows them to be more precise and showed the attachments come in all sizes, even smaller ones for patients as young as three.

Krumm said they see a mix of patients of all kinds, from those with injuries to those suffering from age-related problems.

“We see all of the above,” he said. But I would say age-related are a majority. Everyone gets older.”