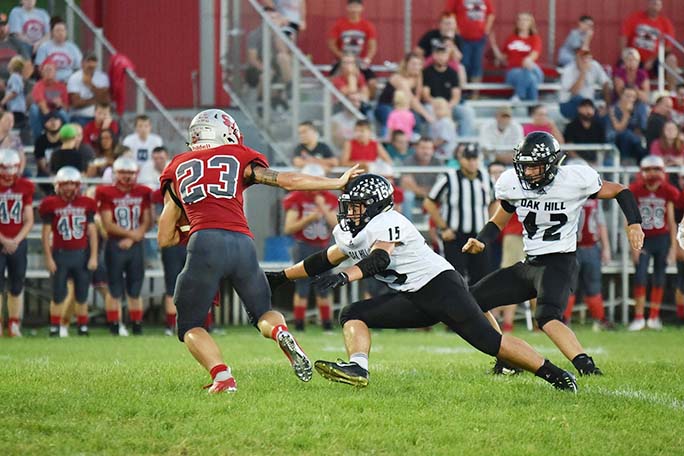 WILLOW WOOD — The Green Bobcats look a lot similar to last year. And the year before.
The Bobcats are enjoying the benefits of a veteran team with a 4-0 start including a Southern Ohio Conference I win last week over Sciotoville East.
Green has lopsided wins over Cincinnati Dohn (54-14), West Union (34-0) and Hannan, W.Va. (86-14).
The Symmes Valley Vikings come into the game 2-2 and 0-1 in the SOC after a 40-0 loss to preseason favorite Oak Hill last week.
Despite the records, the game could be closer than expected.
“We’ve played some good competition and we hope it has helped us. We’re really young and they have basically the same team they’ve had the last three years,” said Vikings’ coach Rusty Webb.
Besides Oak Hill, the Vikings lost to Chesapeake 49-0 while beating South Gallia 14-12 and Fairfield Christian 19-13.
Webb was impressed by the Bobcats’ running backs Mackie Kingery and Alec Smith.
“Both of them are pretty quick,” said Webb. “I think (Lonnie Smith) is their best defensive player. They have some team speed. The big thing is they are healthy now and they have a veteran team.”
The Vikings have just four seniors and Webb said the youth and inexperience keeps rearing its ugly head. However, he has seen improvement.
“We just have to execute better. There are times we execute, but we don’t have the consistency. The effort has been there all year. Consistency is what we’re looking for,” said Webb.
Kickoff is 7 p.m.