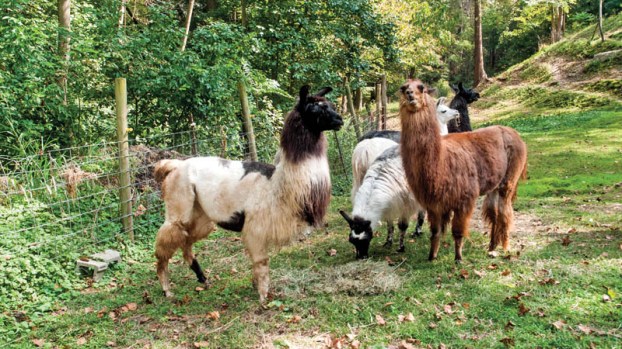 Good News Llamas will be one of many local farms taking part in Bringing the Farm to You at the Lawrence County Fairgrounds on Oct. 20. The event will spotlight the work and products of farmers throughout Lawrence County. It will be free and open to the public.

Bringing the Farm to You set for Oct. 20 at fairgrounds

ROME TOWNSHIP — An event scheduled for the Lawrence County Fairgrounds next month will give attendees a chance to learn more about farming in the region and to sample products from area farms.

“The last two years, the farm bureau has had the Drive it Yourself farm tour,” Judy Ross, of Good News Llamas, one of the participants in the event, said. “This year, we’re going to do it a centralized location.”

Ross said she and her husband, Tom, will have their llamas at the event and she will also be representing her business, Back Porch Fibers, which produces yarn, rugs, clothing and other items from the llamas’ hair.

“We’ll have about everything there,” she said. “We’ll be doing dyeing and knitting.”

She said other participants will include Jeremy Walker, who will have boar goats on hand, and R.J. Murphy, who will be bringing dairy goats.

“There will be soap making with dairy goats,” Ross said.

She said the Lawrence County Sheriff, the Soil and Water Conservation District and the game warden will also have booths set up.

In addition to a chance to see the animals and learn about farming, Ross said farmers will also have products for sale.

There will also be vegetable canning demonstrations, a beekeeping exhibit and maple syrup harvest.

In addition, the 4-H Extension Office from the Ohio State University will have activities for children.

“There going to do a kids adventure,” Ross said.

Ross said the goal is to let the public know that farming exists in the county.

“So many people don’t know, because they don’t see big cornfields,” Ross said. “We have a lot of farming here and we’re trying to get the young people involved and get them into programs like 4-H and FFA.”