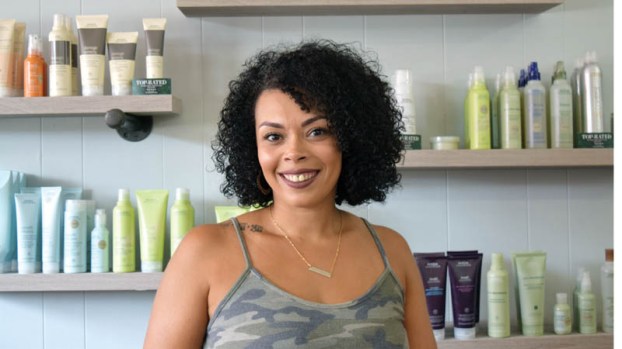 Christine Sammons, is a stylist and one of the co-owners of Meraki Studios, which opened in 2017.

A style of her own

Christine Sammons, is a stylist and one of the co-owners of Meraki Studios, a hair salon in downtown Ironton.

She graduated from Ironton High School in 2002 and moved to Cincinnati to attend the Aveda Academy for cosmetology school andgot her license in 2003.

She worked at two other salons before she opened the salon with Casey Edwards in March 2017.

“It was just something I always wanted to do,” she said. “It was scary just opening your own business and not knowing but it was exciting at the same time. I thought it would go well because I already had a clientele and it wasn’t like I was starting from scratch. My clients followed me and supported me, so that helped a lot.”

Sammons said that starting a business has gone pretty smoothly.

“I feel like everything just fell into place,” she said. One example she gives is that the store carries the Aveda product line.

“Actually, they reached out to us,” Sammons said. “Casey had worked at an Aveda salon in South Carolina, so we had talked about selling Aveda if we could. But it is really hard to become an Aveda salon. So, when they stopped by and reached out to us, we were like ‘Awesome.’ It just felt like everything started to fall into place.”

They chose to have their salon in downtown Ironton for a number of reasons.

“I love Ironton and I want to see the downtown booming again,” Sammons said. “I thought if we put a business down here, maybe that would attract other businesses.”

She said they have talked about expanding the salon and maybe even starting other businesses.

“I just really like downtown Ironton,” she said. “I think it has a lot of potential.”

The name Meraki Studios came about after Sammons was online trying to find a word that summed up what they wanted the salon to be.

“I was online, looking up different words and their meanings,” she said. “And I came across ‘meraki,’ which means ‘the soul, creativity, the love you put into something.’ I thought that was perfect, since we put a part of ourselves into the hair and we do it with love and we want them to feel good. So, we thought it was a good name.”

The salon offers facials, waxing and is branching out. Sammons recently got a license to do micro blading, which creates semi-permanent eyebrows. They are also going to start aromatherapy touch services.

See the Weekend Edition of The Tribune for the special 35 Under 35 section, featuring up and coming young professionals

Thanking vets for their service