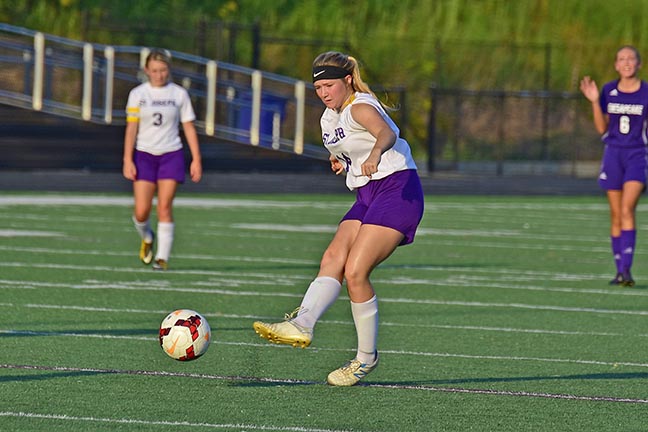 St. Joseph Lady Flyers’ Laiken Unger (14) boots the soccer ball as she moves it up the field during a recent game. The Lady Flyers battled rainy weather conditions on Thursday as they blanked the Rock Hill Redwomen 2-0. (Kent Sanborn of Southern Ohio Sports Photos)

PEDRO — The St. Joseph Lady Flyers didn’t mind playing their game on the road instead of at home due to the rain, and they didn’t mind the rain, either.
Moving from grass to turf, the Lady Flyers ignored the field and weather to post a 2-0 soccer win on Thursday over the Rock Hill Redwomen.
“Both teams played well considering the weather conditions during the game,” said Lady Flyers’ coach Dan Blair.
Goalkeeper Kelsey Malone aided the shutout with 11 saves for the night.
St. Joseph scored quickly in each half to register the margin of victory.
Chloe Sheridan scored two minutes into the game with an assist from Bella Whaley. Both team managed only four shots each the rest of the half.
Emma Whaley then used an assist from Kaitlyn Sheridan to score three minutes into the second half.
Rock Hill had eight shots in the second half and the Lady Flyers four.
St. Joseph visits North Adams on Tuesday.

Jim Walker jim.walker@irontontribune.com SOUTH POINT — Luke Tyree saw an opening and made up his mind that he wasn’t going... read more