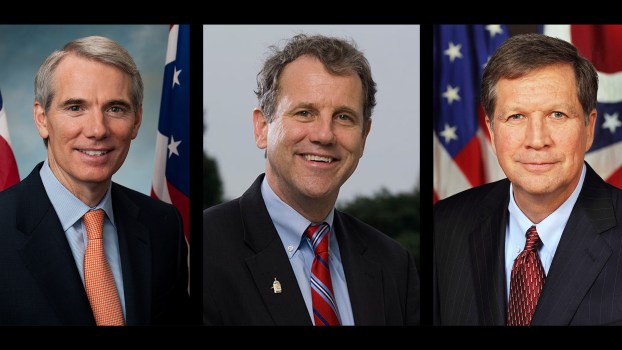 Kasich says he does not support confirmation to court

Democrat Sherrod Brown, who had previously announced his opposition to Kavanaugh’s confirmation to the court, cited his prior issues with the judge’s positions, and stated his support of Dr. Christine Blasey Ford, who testified before the committee over her accusation that Kavanaugh committed a sexual assault against her during a party in the early 1980s.

“Dr. Ford’s courage is inspiring and I am very grateful to her for coming forward to tell her story, even in the face of deep personal cost,” Brown said in a statement. “She was moving, heartfelt and honest. While I had already decided not to support Judge Kavanaugh based on his history of siding with corporations and Wall Street over workers, Dr. Ford’s testimony today was a powerful moment for our country.”

“I had the opportunity to watch the hearing today and listened carefully to both Dr. Ford and Judge Kavanaugh testify,” Portman said in a statement. “I believe allegations of sexual assault should be taken very seriously, and Dr. Ford deserved the opportunity to tell her story and be heard.  I believe my job is to assess the facts that we have before us, and that’s very difficult when no corroboration exists regarding this allegation.”

Portman said that Kavanaugh has adamantly denied the allegation and said that the three people Ford cited as being present had no recollection of the party. Portman said he has known Kavanaugh and his family for more than 15 years, stated he has been “thoroughly vetted” and said he will back confirmation.

On Thursday, Ohio’s Republican governor, John Kasich, broke with his party and urged the Senate not to “rush to confirm” Kavanaugh to the court.

“In the absence of a complete and thorough investigation, and hearing from all parties involved, moving this nomination forward would be a mistake,” Kasich said in a statement. “In the best interest of our country and the integrity of the court, the Senate needs to hold on this confirmation. Without an investigation, and with so many serious issue involved, I can’t support this nomination if they choose to move forward.”