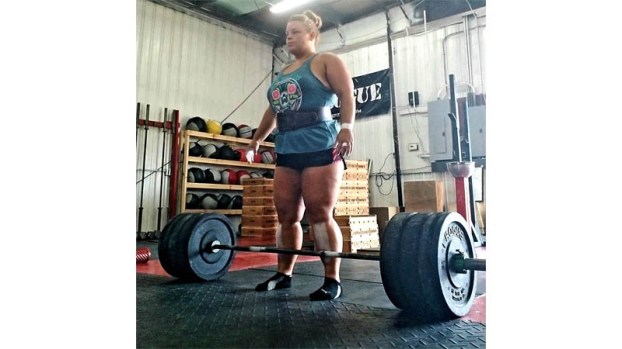 Woman aims to inspire with feats of strength

Lauren Tussey said she decided it was time for a life change.

“I woke up on Nov. 27 (2017), and stopped smoking cold turkey,” she said of her move toward healthy living. “I cleaned up and I started lifting weights.”

By August, she had entered her first strongwoman event, in Lancaster, Ohio, where she took part in events like the axel overhead press, a keg toss and pulling a truck with her bare hands.

“I started training and I wanted to do it successfully,” she said.

Tussey said she was inspired by watching the World’s Strongest Man competitions on cable and even went to see one in person at the University of Charleston in West Virginia.

She attended the 2008 event with her father and she said she had a sign painted to support competitor Mariusz Pudzianowski, a personal favorite.

Tussey said her first exposure to strength training came from her father, with whom she would watch the competition. He also took part in Golden Gloves boxing events.

She has since staged truck pull events at local elementary schools in Boyd County, such as Catlettsburg Elementary, at which she also gives a motivational speech to the children.

“It’s about harnessing strength,” she said. “They don’t see the mental and emotional strength it takes to get there. I try to empower them.”

Tussey works as a financial planner for Transamerica, specializing in retirement planning.

She said she loves her job and helping others find security for the future.

She said there is a risk that Social Security may be diminished or nonexistent when younger generations reach retirement age.

“They should put back what they can now,” she said, adding that investments will show an exponential return.

Tussey said she has only one regret so far.

“I wish I started sooner,” she said. “I wish I’d had strong women or men around who could show me what I could do.”

She said she was “not a small girl” in school as a child and remembers a teacher weighing students and put the results on the wall next to their names.

“I was the largest girl in the class,” she said, remembering feeling shamed.

“I want to show young girls and boys that it doesn’t matter how big or small you are,” she said. “You can do something amazing.”

See the Weekend Edition of The Tribune for the special 35 Under 35 section, featuring up and coming young professionals