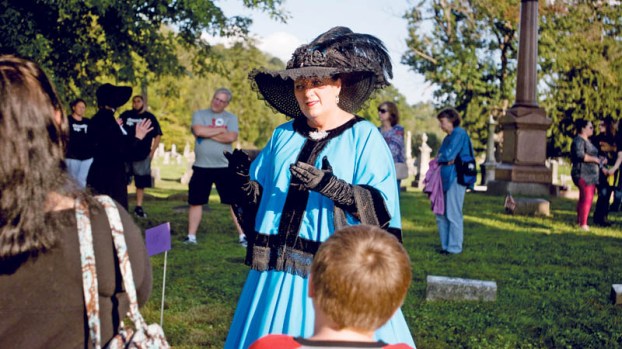 Clara Campbell, played by Ann Boggess, tells the story of how Campbell was to be wed and came back to Ironton to make arrangements and found that her beloved had married another. So, she sued him and won $50,000 in a court settlement.

On Saturday, around 2,000 people came to the Woodland Cemetery in Ironton to learn about Lawrence County’s history during the annual Historical Ghost Walk.

The Lawrence County Historical Society has put on the event for over two decades now.
Reenactors, dressed in period clothes, told the stories of the people buried in the cemetery.

Stories included the amazing life of Nannie Kelley Wright, who was the daughter of a steamboat captain. She married Lindsey Kelly, who was an Ohio state senator and ironmaster of Centre Furnace. She became the first female ironmaster and thrived so much that, at the height of her wealth, the only woman richer was England’s Queen Victoria.

One of the most popular stops on the walk is the grave of Osa Wilson. The Ironton resident was pregnant with her seventh child and died one month after she fell down stairs. Rumors blamed her husband.

The monument on her grave is a woman walking down stairs. People say that a slap mark is visible on her cheek and no matter how it is cleaned, the mark never goes away for long. Sadly, the hands of the statue are missing because thieves stole them. Visitors often rub the belly of the statue for good luck.

Another attraction is Antoinette “Teenie” Peters, a ballerina with Imperial Russian Ballet and the Chicago Opera who married James Peters. She died in a car crash. People say that at midnight, Teenie still comes out to dance with other members of her troupe.

Debbie Rogers, a member of the historical society, has helped coordinate the event for about 15 years.

She said that she continues to coordinate the event with its 34 sites in honor of her friends who originally organized the event, Naomi Deer and Bob Price.

“I do it, because it was something they always wanted done,” she said. “Especially Bob. He loved this night and he loved the Ghost Walk. And everybody loved him back. I miss him a lot.”

She said she thinks the reason that so many people come to the walk is because they don’t teach as much history as they used to in schools.

“It’s our history,” Rogers said. “And we have to continue to let people know about Ironton’s and Lawrence County’s past.”

And she said she thinks a lot of people come because of a renewed interest in history as shown by the popularity of things like ancestry and DNA projects.

“I think that is getting people interested into local history and genealogy,” Rogers said.

Alicia Fraley, of Coal Grove, brought her son, two neighbor kids and one of their cousins to the Ghost Walk.

“The kids really wanted to learn about the history of Ironton and find out the different things that happened here in the past,” she said. “They’ve liked it so far. They really enjoyed the gun going off.”

Another reason was that if her son, Austin, brought the Historical Ghost Walk pamphlet to school, he got extra points. And the Lawrence County Historical Society has a history contest for fourth graders.

“They have to write a paper about one person in local history,” Fraley said. “And he’s excited about doing that.”

Sam Warbel, of Russell, Kentucky, volunteered to fire a long rifle when offered by Bob Long, who was portraying Richard Lambert, the county’s first casualty in the Civil War.

He put the black powder in the rifle and the soldier helped him aim it towards the sky.

Warbel said he was there to learn history and didn’t expect to participate.