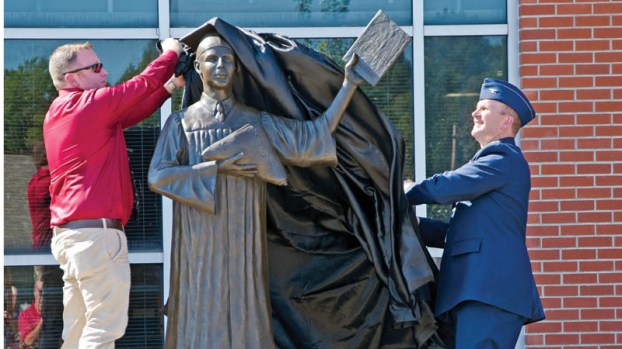 The Student Soldier Statue was unveiled at a ceremony at Dawson-Bryant High School on Sunday.

COAL GROVE — A large crowd gathered at Dawson-Bryant High School on Sunday to unveil a memorial to students from the school district who served their country.

The Student Soldier Statue came as the result of five years of fundraising and is dedicated to veterans and members of the military from the community.

The school system is named for Homer Dawson, the first Ohio casualty of World War I, and Curtis Bryant, who was also killed in action in the war. Both were lifelong residents of Çoal Grove.

Vanderhoof said he was “humbled and honored” to be the keynote speaker at the dedication and unveiling ceremony and spoke of his career.

He said his time in Dawson-Bryant schools helped to get him where he was.

“The teachers and coaches I knew all had an impact,” he said. “I was prepared by this high school to serve.”

Veterans present at the ceremony were honored as the school’s band played the songs of each branch of the military. When they heard their song, they were asked to stand and be recognized.

The statue represents all students, past, present and future, who joined the military. It depicts a student, in cap and gown, holding a yearbook and wearing combat boots.

It was sculpted by Alan Cotrill of Zanesville, who also created a statue of Ohio State University coach Woody Hayes, on display in Newcomerstown, where he attended high school.

At the feet of the statue is a plaque, honoring Dawson and Bryant, while helmets depict various conflicts in which the American military served.

The helmets were sculpted by art students at the high school as part of a two-year project.

On Saturday, around 2,000 people came to the Woodland Cemetery in Ironton to learn about Lawrence County’s history during the... read more