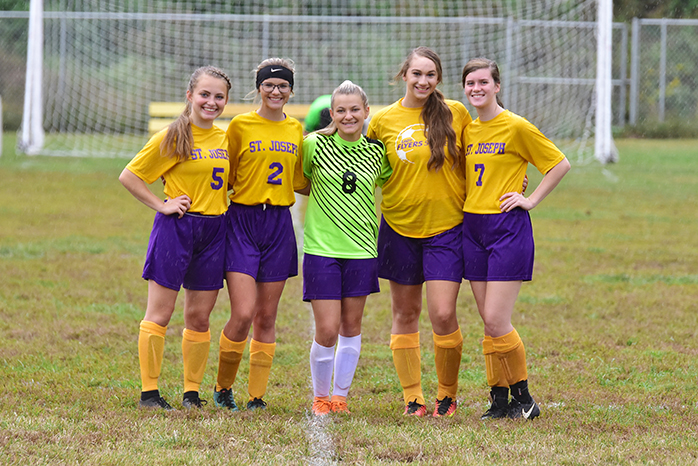 The St. Joseph Lady Flyers celebrated senior night on Thursday prior to their game with the Chesapeake Lady Panthers. Rain fell during the game and lightening not only interrupted the game but shortened it as well, thus leaving only the pre-game clear for pictures. Senior members are, from left to right, Isabella Griffiths, Alex Holtzapfel, Kelsey Malone, Grace Miller and Maddy Whaley. Despite the weather, the Lady Flyers won the weather-shortened game 4-1 over the Lady Panthers. (Kent Sanborn of Southern Ohio Sports Photos)

The rain poured. The lightening interrupted the game.
But not even the weather could dampen the play of the St. Joseph Lady Flyers on Senior Night.
While lightening shortened the soccer game, the Lady Flyers still dominated as they beat the Chesapeake Lady Panthers 4-1 on Thursday.
“I hate that it rained for the senior night game, but these girls didn’t let that dampen their spirits tonight,” said Lady Flyers’ coach Dan Blair. “This is a special group of girls and it has been an honor to coach them.”
St. Joseph began the scoring with 23:32 on the first half clock as Chloe Sheridan got the first of her two goals on the night. Emma Whaley then scored at the 16:18 mark with an assist from Bella Whaley and it was 2-0.
Emma Whaley notched her second goal at the 11:14 mark to make it 3-0.
Chesapeake got on the scoreboard as Sherydan Collins scored with 8:18 left in the half.
But with 2:52 on the clock, lightning flashed and the game took a 30-minute delay.
It didn’t take long for the Lady Flyers to score again once play resumed as Sheridan scored her second goal with 2:05 left in the half.
After a quick five-minute halftime, the teams began the second half only to have lightning strike with 36:44 left and the game was called.
St. Joseph honored its five seniors Grace Miller, Alex Holtzapfel, Isabella Griffiths, Maddy Whaley and Kelsey Malone with a framed jersey along with pictures and candy treats prior to the game.
The Lady Flyers will now await Sunday’s sectional tournament pairings.