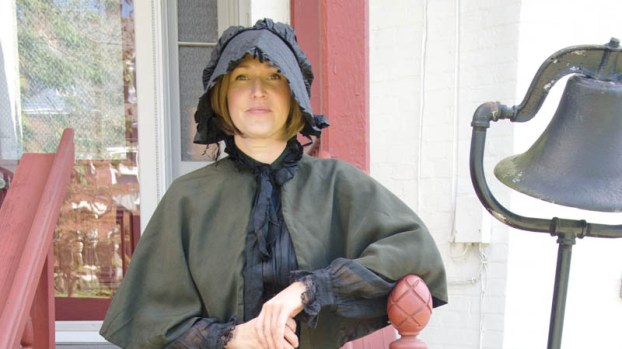 Abby Kuehne wears a dress, bonnet and cape that belonged to her great-grandmother Mary Mahle-Kleinman, who lived in Ironton from 1864 to 1927. The dress was given to Kuehne by a friend, Lola Brohard, last month, returning it to her family. She estimates the dress to be from the Victorian or Edwardian era, dating it between the 1870s and 1900. Photo taken at Lawrence County Museum in Ironton.

Abby Kuehne has been collecting vintage clothes, antique furniture and household items and runs a shop, FortheLoveofMCM on Etsy.

Recently, she acquired an item that has particular and personal significance for her.

On Sept. 22, Lola Brohard returned a dress set to her that belonged to her great-grandmother, Mary Mahle-Kleinman.

Kuehne said Brohard grew up in a garage apartment that belonged to her great-aunt Helen, in the 1500 block of Fifth Street near Ironton High School.

“Lola’s mother was always dear to my aunt,” she said. “In the 1970s, she showed her the dress that belonged to her mother. She said it was over 100 years old.”

“Last year, she found me on Facebook,” she said. “She wanted to return it to our family.”

She said Brohard knew of her interest in clothes of this type and knew it would mean a lot to her.

Kuehne, who has a knowledge of older fashions and timelines, estimates the dress to date to the Victorian and Edwardian period, roughly from 1870 to 1900.

She said the dress is fragile and cannot be worn, other than to briefly try it on.

Mahle-Kleinman was born in New Castle, Ohio, in 1864 and died in 1927. Keuhene said she and her great-grandfather, Joseph Kleinman, were married in Ironton in 1896, when she was 32. They were the parents of Kuehne’s paternal grandfather, also named Joseph Kleinman.

Mahle-Kleinman’s father, John Mahle, was killed in a blast at the Big Etna coke furnace outside Ironton in 1889. One of her brothers, Charles, died at age 12 in 1893, the result of drowning.

She was a lifelong member of St. Joseph Catholic Church and had six children, two of whom, Helen and Frances, owned and operated a store, Needlecraft Kiddie.

“They sold children’s clothing and I know they crocheted baby outfits,” Kuehne said.

Kuehne said it is possible the cotton voile dress, which came as a set with an underskirt, circle cape and bonnet, was a mourning dress. She said if it dates as early as the 1870s or 1880s, it may have belonged to her great great-grandmother, Elizabeth.

Kuehne, who took part in the Woodland Cemetery Historical Ghost Walk over the weekend, portraying Osa Wilson, showed the set to The Tribune last week at the Lawrence County Museum.

She said while the dress has some holes, it is in remarkable shape for its age and has seen some repairs over the years.

She said she is thankful to Brohard for caring for the garments for more than four decades and appreciates their return to her family.

She said she is trying to determine the dress’ exact age, based on its construction, and hopes to find photos of her great-grandmother wearing it.

“I think, for me, where I collect clothing, something is more special if it has history,” she said. “I will always cherish it and, to have something that belonged to my great-grandmother is amazing.