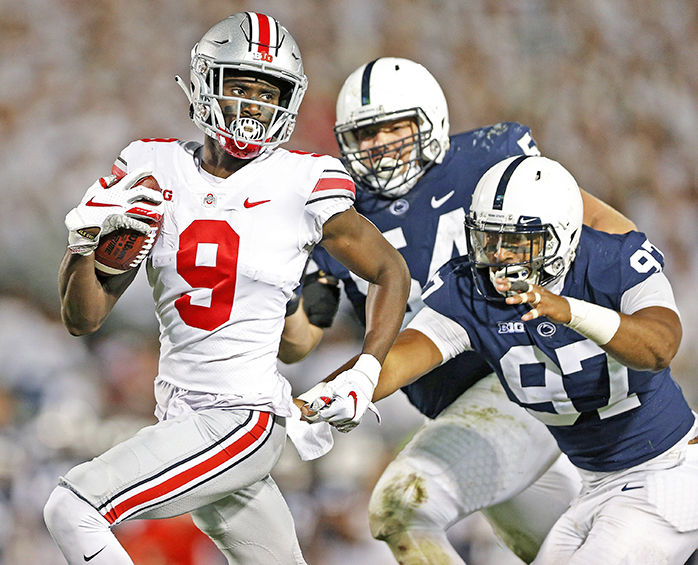 COLUMBUS – Urban Meyer, unlike some Ohio State fans, does not appear to have an oversized concern about history repeating itself.
A year ago, Ohio State made a huge fourth-quarter comeback to beat Penn State by one point. Then it went to Iowa the next week and was blown out 55-24.
Last Saturday night in State College, Pa., OSU again came from two touchdowns down in the final minutes to beat Penn State 27-26. So, the question of something like that happening again is a cliched but interesting topic guaranteed to produce fan angst.
“We haven’t had that conversation yet. We will. That’s real. That’s — especially in places like Ohio State where it will be a really good team, and now prepare for another really good team. That will be the message,” Meyer said.
But it appears Iowa in 2017 won’t be a major part of the preparation. “I only look forward,” Meyer said.
Indiana (4-1, 1-1 Big Ten) is this week’s opponent for Ohio State in a 4 p.m. Saturday game at Ohio Stadium.
The Hoosiers beat Rutgers 24-17 last Saturday and lost to Michigan State 35-21 two weeks ago. Their other wins were over Florida International, Virginia and Ball State.
Like the fans, Meyer wants to avoid complacency this week and the rest of the season. It’s just a different type of complacency he has in mind. He never wants his team to be satisfied.
“We’re 5-0 and we haven’t played close to our best game,” he said about the No. 3-ranked Buckeyes. “There is a tremendous ceiling on this team and we haven’t gotten close to it yet,” he said.
Meyer said he had a “call to arms” meeting with the team Sunday. “There was a little bit of a call to arms meeting. We still need to get more production out of some people who have been with the program a year or two or some freshmen,” he said.
NOTES:
• MINNESOTA KICKOFF: Ohio State’s game against Minnesota on Oct. 13 at Ohio Stadium will kick off at noon.
• INJURY UPDATE: Defensive tackle Dre’Mont Jones is “very probable” to play against Indiana after briefly leaving the Penn State game in the fourth quarter with an injury. Cornerback Damon Arnette, who also left the Penn State game with an injury, is “probable.”
• BIG TEN HONORS: For the second week in a row and the third time in five weeks, OSU quarterback Dwayne Haskins is the Big Ten Offensive Player of the Week. Defensive end Chase Young shared the Big Ten Defensive Player of the Week award with Michigan’s Chase Winovich.
• NO APPEAL: Ohio State wanted to appeal safety Isaiah Pryor’s suspension for the first half of the Indiana game for targeting on a hit during last Saturday’s game but discovered the Big Ten does not hear appeals on targeting.
“You cannot appeal suspensions for targeting. Do I agree with it? I don’t have time to argue about it,” Meyer said. “If you watch him (Pryor) he was going for the ball and contact was made. But I have no time to argue.”
• QUARTERBACK SNEAKS: Meyer was asked why Ohio State doesn’t put its quarterback under center instead of in a shotgun formation on short yardage plays.
With Haskins in a shotgun formation, OSU barely made the yardage on one fourth down and one situation and was stopped on another against Penn State.
Meyer said there are “a lot of different reasons” not to change.
“You see teams that are operating out of the shotgun and they go under center and they drop the ball just because they don’t do it very often. But we (Ohio State’s coaches) have had that conversation over and over.”

Burfict returns from yet another suspension