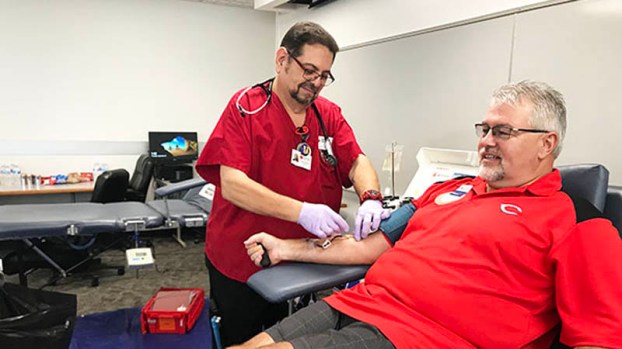 ASHLAND — It was the spring of 1986 when Ashland Community and Technical College freshman John McGlone donated his first pint of blood.

There was a blood drive on campus and McGlone wanted to continue a tradition of giving instilled in him by his grandmother.

Bernice McGlone, or Granny Bern to most everyone who knew her, had a penchant for donating. By the time of her passing, she had given 17 and a half pints of her own blood.

Thirty-plus years later, McGlone, who recently retired as ACTC’s dean of public safety, reclined on a table set up by the American Red Cross in the John and Pat Stewart Board Room at ACTC, watching as the collection specialist prepped his arm for another donation.

The two pints-worth of O positive red blood cells on Sept. 20, added to McGlone’s previous donations, would equal 17 gallons. Almost as much as Granny Bern.

“My grandmother had a little diary, so I keep a little sheet of paper in there with tick marks,” he said. “That’s how I know where I am in relation to my grandmother.”

McGlone said he found out by his second donation just how important donating blood can be.

“Not too long after that (first donation), my grandfather was in the hospital,” he said. “So I went down and donated for him. And at that time, you could donate for a particular person.

So that saved him $1,500. That was immediate reinforcement within the first two times that I gave, that this is really important.”

The process of donating blood, from the time you arrive to register, until the time you leave takes about an hour. The donation itself, a pint of whole blood, takes only about 8-10 minutes on average. Donors will answer a few questions about health history and places traveled during a private and confidential interview, as well as have their temperature, pulse, blood pressure and hemoglobin level checked.

For donors like McGlone who do the Power Red donation, two pints of red blood cells only, it can take about 30 minutes longer.

In addition to meeting the standard requirements to give whole blood, Power Red donors must meet other specific criteria. They must be O, A negative or B negative donors, donate blood at least three times a year and meet certain height and weight guidelines.

Anthony Smith, the collection specialist and team leader who drew McGlone’s blood on Sept. 20, said the process is completed using an apheresis machine.

“We are taking his blood cells and giving back his plasma,” Smith said. “Instead of giving six times a year, he only has to do three. It’s once a quarter and it counts for two (donations) each time.”

Because the plasma contains white cells, protein and sugars, and because donors also receive saline, Smith said donors leave more hydrated than when they first arrived.

McGlone said the sensation is somewhat cold once the plasma reenters the body.

No matter which donation method is used, a donor may only give up to six pints of blood per year.

According to the American Red Cross, approximately 36,000 units of red blood cells are needed every day in the U.S. and one donation can potentially save up to three lives.

“If someone is going to have surgery or have a child, if you have family members in an accident, nothing in the world can replace blood when you need it,” McGlone said. “This is something that if someone wants to donate, maybe you don’t have cash, maybe you don’t have a lot of time, everyone has blood that they can donate. It takes an hour of your time and it can literally save someone’s life.”

ACTC’s next blood drive will be from 10 a.m.-3 p.m. Nov. 1 at the Technology Drive Campus. To find other locations for blood drives, visit redcrossblood.org.