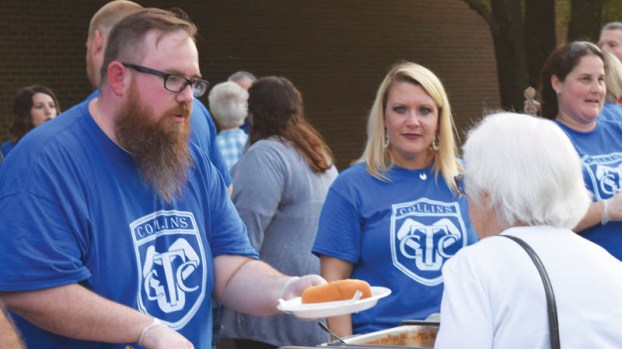 Faculty and staff members serve food to the public at the annual Hog Roast at Collins Career Technical Center on Tuesday.

GETAWAY — Collins Career Technical Center hosted its annual fall Hog Roast on Tuesday, which superintendent Steve Dodgion says is a thank you for the support the vocational school receives from people around the county.

“This is our opportunity to show our appreciation to the community,” he said. “We host this every fall. The support they give us is awesome.”

In addition to food, inflatables were set up and face painting and pumpkin decorating were available for children, while students from the school offered free manicures to the public.

And, with the election coming up, Dodgion said the event served a second purpose.

A stage was set up at the edge of the dining area, where the school invited candidates for the general election to make their pitch to voters.

The first to go up was Democrat Donald Capper, who currently serves as judge for the Lawrence Municipal Court and is running for the Lawrence County Common Pleas judge position being vacated by the retiring Charles Cooper.

Capper, of Proctorville, said a motivation for him to run is the addiction and drug epidemic facing the region, which he hopes to tackle head on.

He points out he was the first judge in the county to sentence people to treatment, which he said is more beneficial than simply sending them to prison.

“If you don’t get them treatment, then as soon as they come out, they’re going to go back to it,” he said, adding that “jail still serves as a tool” for those who will not comply with treatment.

Capper said he also hopes to increase transparency in the court and make records available digitally, as the state and federal courts have done.

His opponent, Republican attorney Christen Finley, of South Point, was not present when the candidates were making speeches, but she arrived in time to mix with potential voters in the crowd.

Finley, who said she had been out knocking on doors earlier, told The Tribune that, over her 15-year career in the legal field, she has seen the need for a change in the way business is done in the county.

She said the duty of a judge is to apply the law fairly, regardless of politics.

“Instead of continuing to complain, I decided to step up and do what’s good and right for Lawrence County,” she said.

Touching on familiar themes, he said he is part of “a great team” on the commission and said he works well with his fellow Republican, Bill Pratt, as well as Democrat DeAnna Holliday.

Hayes, of Proctorville, pointed to the $1 million in funds secured from the legislature for building a new senior center and EMS station at the Lawrence County Fairgrounds as accomplishments of his most recent term in office.

“I’ve always said it’s about the people and not the paycheck,” he said of his motivation for the position.

His opponent, Democrat Robert McCollister, said he views his run for commission as an extension of 40 years of public service.

Having taught and served as a coach in the Rock Hill School system, McCollister said, after deciding to run, he did extensive research on “how local officials in other places marshal resources to make things better.”

As an example, he pointed to Cincinnati, where he said public and the private sector joined together to become one of the first cities to offer universal pre-kindergarten education, which he said has helped lower income families to have the same head start on education as the upper middle class.

“I believe we have the resources to do it in Lawrence County,” he said.

“It’s good to be back in my hometown of Getaway,” Stephens, who also serves as his party’s  head in the county, said. “I call it the center of the universe.”

His Democratic opponent, Proctorville businessman Jason Tolliver, had to cancel, citing an illness, but his fiancé greeted the crowd in his place and asked for their support.

Brian Baldridge, a Republican commissioner for Adams County, said he is running for the legislature with hopes to focus on education and infrastructure.

As a firefighter, paramedic and 4-H advisor, he said he was motivated to enter government and public service, also serving as a township liaison.
Baldridge, a Cherry Fork resident, said he understands how funds are used to fix local problems.

“Like filling the potholes right here at home,” he said. “I’ve been there and done that.”

His Democratic opponent, Portsmouth attorney Adrienne Buckler said she wants to focus on returning funds to local governments, as well as tackling the drug epidemic.

“We see every day how its affecting people,” she said.

Buckler, who, in addition to her own law firm, also volunteers her services at a low income legal clinic, also touched on the fact that she was younger than typical candidates for office.

“I shouldn’t be punished for knowing, at the age of 28, that I want to make a difference,” she said.

Democrat Samantha Thomas-Bush, of Proctorville, said she wants to “prioritize kids” if elected and make sure public schools have proper funding.

She pointed to the scandal involving the Electronic School of Tomorrow, a now-closed virtual charter school, which has been ordered to repay $60 million to the state in overpayments.

A graduate of Marshall University and the University of Louisville’s School of Law, Thomas-Bush said she wanted to bring business incubators to the region.

“We need to make Lawrence County a friendly place for business,” she said.

Thomas-Bush will face incumbent Republican Rep. Ryan Smith, who currently serves as Ohio’s speaker of the house, on the ballot.

The final speaker of the event, who took the stage after night fell, was a candidate for statewide office, Democratic former U.S. Rep. Zack Space, who is running for Ohio auditor.

Space, who lives in Dover, pointed out that he is from the Appalachian region of the state, which he said has been “left behind” once coal and steel jobs vanished.

He said the auditor’s office serves as watchdog for the people and that he wants to crack down on gerrymandering, which he says foster extremism in the drawing of congressional districts, and fight to “take the money out of politics.

As a Democrat, he said he agreed with President Donald Trump, a Republican on the problem of special interests.

“He was right about one thing,” Space said. “The system is rigged.”

Space will face state Republican state Rep. Keith Faber, the former president of the Ohio Senate, in the open race.

None of the four candidates running for 4th District Court of Appeals were present at the event, but incumbent Marie Hoover, of Stout, was represented by her friend, DeAnna Holliday, who read a statement on her behalf.

She will face Jason Smith, of Ironton, for a six-year term. Smith was represented by his wife, Kelly Smith, at the event.

Valarie Gerlach, of Portsmouth, and Mike Hess, of Commercial Point, are running for the other open seat on the court.

A letter from U.S. Rep. Bill Johnson, R-Ohio, was read by his field representative, Juli

Stephens. Johnson, of Marietta, will face Democrat Shawna Roberts, of Belmont County, on the ballot.

The general election is set for Nov. 6 in Lawrence County.

CHESAPEAKE — Dick Gilpin, of the Chesapeake Area Citizens Coalition, says the annual Octoberfest in the village is like a... read more