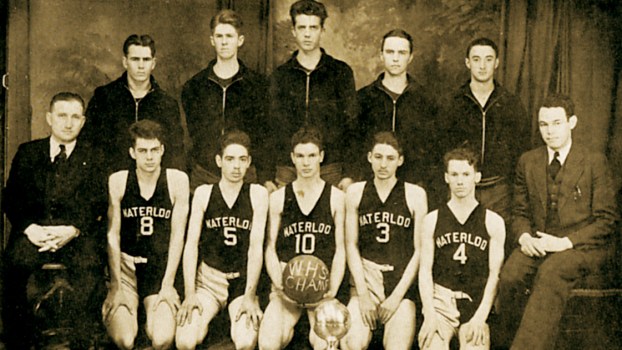 The Tribune/File photo The Waterloo Wonders, the legendary Depression era team from Waterloo High School, will be honored with Waterloo Wonders Day at the Old Waterloo Methodist Church, starting at 10 a.m. today.

Waterloo Wonders to be honored today

WATERLOO — A legendary Lawrence County high school basketball team is set to be honored at an event today (Saturday, Oct. 13).

Waterloo Wonders Day is scheduled to begin at 10 a.m. at the Old Waterloo Methodist Church and will run through the afternoon.

The team of farm boys from the town, which had a population of 150 at the time, became known nationally for their back-to-back state championships in the 1930s. At one point, they had a 56-game winning streak and many members went on to play professionally.

The team, from Waterloo High School, received their name from Ironton Tribune journalist and sports editor Stan Morris, who covered them at their height during the Great Depression.

They were enshrined in the Ohio Hoop Zone high school basketball Hall of Fame in 2010 and have been written about in Sports Illustrated, who compared them to “the great professional barnstormers of that pre-NBA era.”

A historical marker, commemorating the team, will be rededicated, while Waterloo High School Memorabilia will be on display all day.

Dick Burdette, the author of “The Fabulous Waterloo Wonders,” will be signing books, sharing stories, and taking story submissions for his upcoming third book on the team, “Wonders Never Cease.”

There will also be games for children, as well as a cornhole tournament.

“Everyone is welcome for a fun day with the family,” organizer Jonda Carpenter said in a news release. “Consider it a Waterloo school reunion.”

Admission to the event is free, but donations to help replace the roof of the church are great appreciated, organizers said.

The church is located on County Road 14, just off State Route 141 in Waterloo. Parking will be available on the road in front of the church or at the old County Line Store on State Route 141.

BURLINGTON — Students and teachers took to the sidewalk on Thursday with a message of fire safety. Burlington Elementary hosted... read more