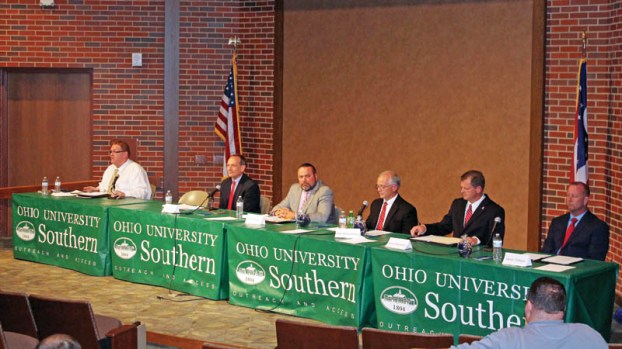 With the general election less than three weeks away, candidates for countywide office met on stage Thursday to discuss their platforms and issues impacting the region.

Democrats Donald Capper, Robert McCollister and Jason Tolliver and Republicans Freddie Hayes Jr. and Jason Stephens participated in the event, which was organized by The Tribune as part of a partnership with Ohio University Southern and Armstrong Cable.

Candidates for county commission, county auditor and common pleas judge were given the opportunity to make an opening statement, were asked questions by Tribune publisher Scott Schmeltzer and then asked to present concluding remarks.

Donald Capper was the sole participant in the portion dedicated to the race to fill the seat being vacated by Lawrence Common Pleas Judge Charles Cooper, who is leaving office due to mandatory retirement age.

Though the race for the bench is listed as nonpartisan on the ballot, Capper, who has served as Lawrence Municipal Court judge for 26 years, identifies as a Democrat.

His opponent, attorney Christen Finley, who identifies as a Republican, declined the invite to take part in the forum.

Capper said his time on the municipal court, which he described as the ‘largest in the county” and handling “two-thirds of the cases,” has prepared him for the common pleas job.

“I believe I have the experience and the knowledge to step into that position and run the court well,” he said.

Capper said he would like to address the opioid epidemic, which he said has been a major presence in his court.

Capper said he would like to gather more statistics on treatment programs and better determine what is most effective.

He said he would also like to look for better ways to unify the court system in the county and to look for ways to increase transparency, such as putting records online as federal and state courts do.

Incumbent Lawrence County Auditor Jason Stephens said the role of his office is that of “a big mirror” to “present an accurate picture of the results others have decided.”

“We don’t appropriate money, but the auditor determines how much money is available for the commission to appropriate,” he said, stating the financial decisions of other offices, such as county commissioners, school boards and village and township governments are carried out by his office.

Stephens, who has worked in government for 18 years and spent 22 years in the private sector, highlighted his efforts at making the office more transparent and providing as much information as possible to the public.

He pointed to the office’s website, which features a calculator that allows residents to determine what the cost of a levy will be on a parcel of land, as well as tax maps and other items.

Stephens said he would like to continue his work in the position.

“We have run a positive campaign that focuses on my background, my qualifications and the improvements I have made to the county auditor’s office,” he said. “I will continue to work hard for you to make sure the auditor’s office is professional, efficient and customer friendly.”

His opponent, Democrat Jason Tolliver, did not speak nearly as long or in detail as Stephens, but ran on his record as a businessman in construction and steel fabrication.

Tolliver, a Fairland High and Ohio University Southern graduate, of Proctorville, said this has prepared him for the job.

“I have several hundred people,” he said of those working under him. “150-600, depending on workload. I have a great resume and a great record and, if you elect me, you’ll get great results.”

He said he would also like to increase transparency for the office.

“I think an open door, open book policy, open to the public is what we need,” he said.

The race for the county commission seat on the ballot came down to two messages, one of touting hard work and a record in office and one of vision and new leadership.

Incumbent Republican Commissioner Freddie Hayes Jr. said that he is part of “a great team” on the commission and that he is “passionate” about his job and views it “as a way to give back to county” after having success as a local businessman.

“We can get anything done if we keep working,” Hayes said. “Anyone who knows me knows I’m a hard worker.”

His opponent, Democrat Robert McCollister, is a former teacher and coach at Rock Hill schools.
A first-time candidate, he said he did not always have plans to run for office, but thinks “a new era of leadership” is needed.

“We need to change the way politics are done in Lawrence County,” he said.
The candidates were asked about broadband access for rural regions of the county.

Hayes agreed that this is a key infrastructure need and said that it is something the commission has been pursuing.

“We’ve worked on it the last few years,” he said, adding that he has several friends in those areas of the region who have expressed the need. “We have reached out to try to get something done. It takes time, but this is something we’re working on and will continue to work on.”

McCollister said there is a “digital divide” in which businesses and students are being left behind by lack of high speed Internet access.

He said he was shocked, as a teacher, at how many students did not have high speed broadband and cited a small business owner, selling farm products in Symmes valley, who had to go online to work at 2 a.m. when traffic was low in order to conduct business.

McCollister said that “every great infrastructure project” in the nation’s history, from railroads to radio to rural electrification in Lawrence County, came as a result of public institutions being involved.

“There is a role for government,” he said.

On the issue of overcrowding at the county jail, McCollister said the commission had made a mistake not paying a $64,000 utility bill for a facility at Franklin Furnace that could have been used as a new jail location.

“We need to get right with the department of rehabilitation and pay the bill,” he said, stating the administration of Gov. John Kasich had “moved heaven and earth to get us access to the Franklin Furnace facility.”

He said he hoped paying the bill would get the county a “second bite at the apple” regarding the facility.

Hayes said the jail situation is something he and the commission have “worked the last seven years trying to solve.”

He said a new facility is needed, but he wanted to be sure it could be done without a tax levy, something he said he would always oppose.

Hayes said there are also issues with staffing and that he wanted to make sure the plans were financially solvent.

“We need to be conservative with money,” he said, stating Scioto County had made mistakes and “gone into the red.”

“Freddie Hayes will not be a part of that,” he said.

Hayes said the problem will be resolved, but “it takes time.”

“It’s not going to happen overnight,” he said. “Government is different from the private sector.”

McCollister shared his ideas for providing universal pre-kindergarten education to the county, which he said was based on a plan used in Cincinnati, where the public and private sectors “marshaled all of their resources” to accomplish it.

Hayes ran on his record, stating he was “very proud of the job we’ve been doing.”

He pointed to economic growth at The Point industrial park and Dow Chemical sites, working to secure $1 million in funding for a new EMS station at the Lawrence County Fairgrounds, as well as contacts he has made on the job, including a trip he and fellow Commissioner DeAnna Holliday made to Washington to meet with the incoming Trump administration.

While there was not a specific part of the forum dedicated to Issue 1, a statewide ballot measure, which would reduce penalties for drug crimes, the subject came up often.

Tolliver stated that all candidates on stage opposed the measure, to which he received many nods and no objections and urged county voters to cast a “no” vote.

Capper said it was the most important item on the general election ballot and said passage would “make the drug problem worse.”

He said, if it became law, the proposal would legally block him from sentencing a person driving under the influence of drugs to jail until a third offense.

“If you’re pulled over while driving on heroin, I would be prohibited from putting you in jail,” he said.

He said, without the threat of jail, many addicts would refuse recovery programs.

“A lot of times they don’t want to be clean,” he said. “But if someone gets clean if they’re afraid of going to jail, I’m fine with that.”

Stephens reminded voters that Issue 1 was on the back of the ballot and urged them to vote “No” as well.

“Be sure to turn your ballot over,” he said.

To view the full video of the forum, visit The Tribune’s website and Facebook page. The event will also air on Armstrong Cable at a later date.

The general election is set for Nov. 6. The Tribune’s election guide, featuring submission from all candidates will be included with the Oct. 30 edition of the newspaper.

A sense of pride

Rock Hill Athlete, born with one hand, excels in football and track If you have been around the game for... read more