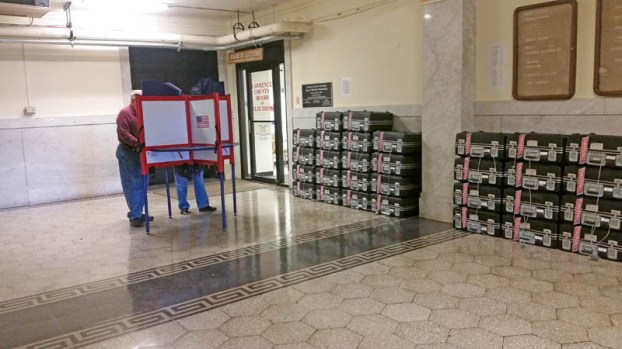 A pair of voters take advantage of early voting for the Nov. 6 general election at the Lawrence County Courthouse on Oct. 19.

With less than two weeks to go until the Nov. 6 general election, many Lawrence County voters are casting their ballots early.

“It’s going great,” said Catherine Snider, director of the Lawrence County Board of Elections on Tuesday afternoon. “As of Friday, we had 345 people vote in person at the office and I know it’s over that now, because we had a bunch in on Monday.”

She said they have had nearly 5,000 requests for absentee ballots that will be mailed out to places like nursing homes.

“We’ve probably gotten 1,000 of those back already,” Snider said.

All the walk-in ballots and ballots that are mailed back and postmarked by Nov. 5 will be counted with the ballots cast at polling locations on Nov 6 after the polls close at 7:30 p.m.

Snider said that there are several factors for people wanting to vote in this year’s mid-term election, which don’t attract as many voters as the years when there is a presidential election.

“All midterms are important, but they aren’t always taken that seriously, typically. This one, we’re expecting better than normal turn out,” she said.

This year, both parties are telling their bases to vote because the two houses of Congress could be flipped from Republican control to Democratic control. “And locally, there are a few heated races and people are being more vocal. And State Issue 1 is a big deal to a lot of people.”

State Issue 1, amongst many things, would change the possession of some drugs from a felony charge to a misdemeanor charge and reduce prison sentences of people already in prison by 25 percent if they participate in rehabilitation, work or educational programming.

People who were incarcerated for murder, rape or child molestation would not be eligible.

“Issue 1 is a big deal for any county like ours that is dealing with drug issues,” Snider said.
And the race for the Ohio Governor’s office is attracting a lot of attention from voters.

“I think all that is drawing people in,” Snider said. “This year, with the current political climate, the local races and State Issue 1 are bringing in a lot of people.”

One topic that the board of elections has been monitoring is the potential for hacking by outside forces. The state of Ohio has implemented a lot of additional security to prevent that from happening.

“We have a lot of a lot of new things in place for cybersecurity,” Snider said. “It is frustrating because of all the additional safety checks and balances and new passcodes and things.”

She said that only the voter registration database is an issue because the tablulation machines are a closed system and aren’t accessible via the internet.

“They can’t get into our tabulation or results,” Snider said. “Hacking is definitely something to be concerned about but the Secretary of State is all over it and so are we. By directive, we have to be very astute to the possibilities and be aware of the possibilities. We want everyone’s vote to count.”

For information about voting in Lawrence County, go to the board of elections web site at https://lawrence.ohioboe.com/