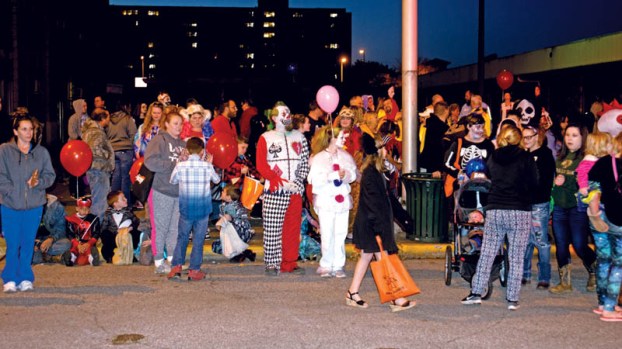 A couple of hundred people gathered at the Rotary Fountain on Monday night waiting for Ironton’s annual Halloween parade to begin.

The streets of Ironton were overrun on Monday evening by zombies, pirates, killer clowns and even a couple dinosaurs, as thousands of kids and their parents went from downtown business to downtown business to trick or treat and wait for the annual Halloween parade to begin.

There were zombies, there were witches, and there was a handful of Chuckies, Jason Voorhees and Michael Meyers. Wonder Woman and Black Panther picked up their candy from tables and then headed to the next.

Costumes ranged from simple outfits and masks to more elaborate costumes that turned red wagons into things like an army tank or a mousetrap. There was even one which was a wheelchair turned into the Hogwarts Express.

There were so many people that they only let 20 or so people in at a time into the City Center to get candy from political candidates and officeholders.

Mayor Katrina Keith was on hand, documenting the scene and the costumes.

She said the city runs the Safe Trick or Treat event while the Ironton Rotary Club coordinates the parade.

“We took on the Safe Trick or Treat because some parents aren’t comfortable letting their children go out throughout the community,” she said. “This way it is two-fold, they can come to the City Center and the downtown businesses in a safe environment and they don’t have to worry about it. Plus, it brings people downtown, they can see the stores and maybe go in and shop.”

And it was a good October evening for the event.

“It’s warm and not raining,” Keith said. “People can dress up and have fun and be something they are not. And everyone seems to be having fun.”

As darkness fell, a horde of costumed people gathered at Rotary Fountain and promptly at 7 p.m., the Ironton High School Million Dollar Marching Band started playing and lead the assembled ghouls to the Market Square and splash park area to have their costumes judged by members of the Ironton Rotary Club and Ohio University Southern students.

Dawson-Bryant sixth grader Marlee Malone, 11, has a love for animals, and for the past two years has organized donation... read more