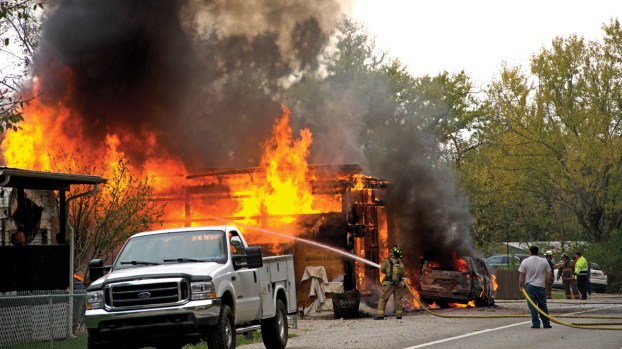 The Tribune/Heath Harrison Crews battle a structure fire at Bevins Auto Sales on State Route 7 between Chesapeake and Proctorville on Thursday afternoon.

CHESAPEAKE — Crews responded to a structure fire on State Route 7 on Thursday afternoon.

Flames towered above the roadway from the blaze, which fully engulfed Bevins Auto Sales.

According to the Ohio State High Patrol’s Lawrence County post, the call for the fire came in at 1:59 p.m.

Chesapeake-Union Volunteer Fire Department chief Joey McMaster said crews from his department, as well as Proctorville, Windsor, Burlington responded to the call, along with South Point, who provided area coverage.

He said Lawrence County EMS and the sheriff’s office were also on scene.

The highway was completely closed down by the Ohio State Highway Patrol and the sheriff’s department as crews attempted to extinguish the blaze.

Witnesses nearby said it spread quickly, and small explosions could be heard at the scene as the fire raged.

By 4:30 p.m., Highway Patrol said one lane of traffic had been reopened on the highway after crews had worked to extinguish the fire.

McMaster said the cause of the fire was still being investigated by the fire marshal’s office..

He described the dealership’s garage and office as a total loss and said five or six vehicles were damaged.

No one was injured by the fire and neighboring residences were not damaged, McMaster said.