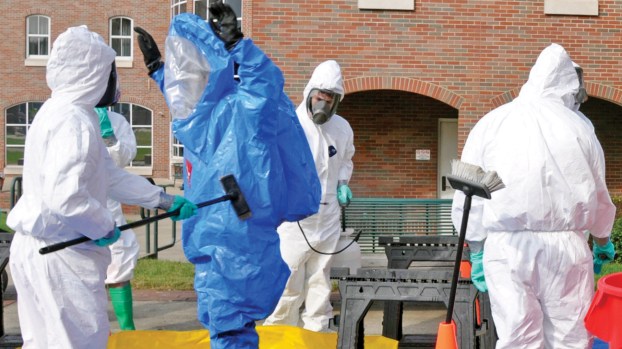 It looked bad at the Ohio University Southern campus on Wednesday afternoon.

There were people passed out. Brightly colored hazmat suit covered crews cleaned up an unknown substance.

Thankfully, it was all a drill.

Students from various programs at OUS and Collins Career Technical Center came together to be part of a simulated mock disaster. This year, the situation was that fentanyl, a powerful opioid that can cause nausea, sweating and drowsiness by just touching it or breathing it, had been found on the OUS campus.

The students handled the situation as if it were a real disaster, using the knowledge that they learned in their classes. To add to the realness of the situation, members of the Ironton fire and police departments, Lawrence County EMS, the Lawrence County Sheriff’s Office and the Ohio State Highway Patrol were on hand to help the students.

He said that now students need a certain number of points to graduate and one of the ways to get those points was to participate in a Hazardous Waste Operations and Emergency Response Standard (HAZWOPER) event.

“We did a demonstration with it last year and we’re happy to do it again this year,” Hammond said. “We are working this into our program annually.”

He said the event is good for teaching the students on how to handle real world problems like he has in his 32 years as a law officer and firefighter.

“There are communication problems, there are air pack problems, suit problems,” Hammond said. “These are all problems that really occur on scenes and the students learn to overcome it. It’s good to get the kids exposed to this.”

He said that what they did in the simulation is what they would do in a real life situation.

“I hope they take their theoretical skills they get in the classroom and apply them to field,” he said. “Make a ‘rubber meets the road’ type of moment, where they go ‘OK, I get why I have to wear this type of personal protection equipment. I understand why they tell us to do it this way.’”

Cheyenne Long, a Rock Hill student studying forensic science at CCTC, said she liked putting what she was taught into practice.

“It was fun. A lot of us want to go into police work or hazmat or the Coast Guard and this will really help us later in life,” she said, adding that she liked working with actual first responders. “It made us all take it a lot more seriously. It was more pressure, but it is good pressure.”

Also observing Wednesday’s simulation was John Carey, the chancellor of the Ohio Department of Education.

“I wanted to see the successful collaboration between Collins Career Technical Center and Ohio University Southern and witness, in action, the training the students had received,” he said. “And it was fantastic. They did an awesome job.”

He said one of the things that the Ohio Department of Education had done was instead of telling regions of the state what to do, they had the various schools ask businesses in their areas what the need was to help guide their programs.

“It has worked out fantastically,” Carey said, adding that the money for the mobile training unit came from the Ohio Department of Education. “It is an in-demand job for existing businesses in this area as well as an area of possible job growth. We want to give students options to stay here with the training they have and be part of their communities.”

OUS Dean Nicole Pennington said all the students did a great job during the simulation.

She said all the students were very professional and really assumed to the role they were assigned.

“To give them that hands-on experience of something they could deal with when they graduate, is just invaluable,” she said.

“They went through a workshop, they did a didactic piece and then they were able to put it all into motion. They did a fantastic job.”

Democrat Richard Cordray has a slight lead over Republican Mike DeWine in a new poll for Ohio’s gubernatorial race. In... read more