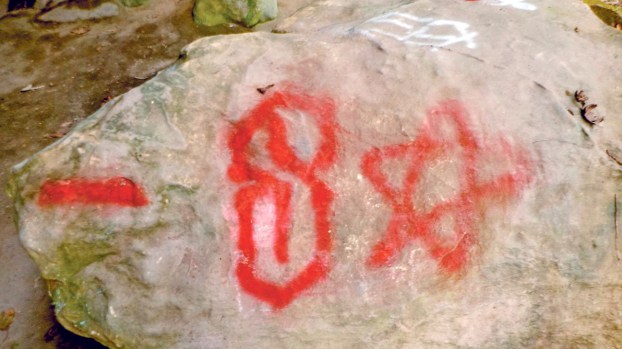 Submitted A vandal or vandals used silver and red spray paint to put graffiti on a boulder in Wayne National Forest on Oct. 24. Investigators are asking the public for help identifying those responsible.

The Wayne National Forest is looking for the person or people responsible for vandalizing boulders, trees and even the boardwalk that leads to a trail and they are asking the public for help finding those responsible.

The vandal or vandals used silver and red spray paints to paint a figure of a man on a boulder, a stylized ‘S,” a dash and a star on another bolder, painted a trail marker on a tree red and put silver and red stripes along a board walk in the Lake Vesuvius Recreation Area at the Rock House Trail.

Investigators believe the graffiti was done a week or so ago, probably during the evening hours of Wednesday, Oct. 24.

The WNF saw a spike in reactions after they posted about the vandalism on Facebook.

By Thursday afternoon, there were over 350 reactions with a large number of people using angry emoji faces. Besides being mad at the spoiling of one of their favorite spots, people were hoping that the vandal or vandals were caught, charged and then had to clean up the spray paint.

If anyone has knows anything about the incident and who may have done it are asked to call, U.S. Forest Service Law Enforcement and Investigation on the Wayne National Forest Ironton Ranger District at 740-534-6543.

Any leads will be kept confidential.

ASHLAND — It’s good news for people driving in or out of downtown Ashland, Kentucky — the work on the... read more