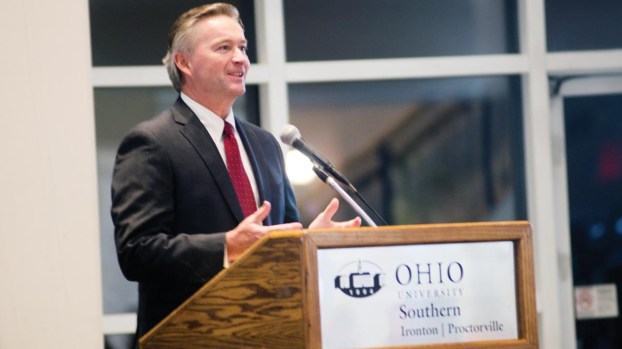 The Tribune/Heath Harrison Doug Hall, of HarbisonWalker International, speaks at the 2018 Lawrence County Chamber of Commerce dinner after the company was named as the Business of the Year on Thursday.

HWI honored by Chamber at dinner

One of Lawrence County’s newest major employers was honored as the Business of the Year at the 2018 Chamber of Commerce dinner on Thursday.

HarbisonWalker International opened its new refractories plant in South Point over the summer, bringing with it 40 jobs to the region.

The Pittsburgh-based company was presented with the award from Bill Dingus, executive director of the Lawrence Economic Development Corporation.

Doug Hall, who accepted for HWI, said the company is already “recognized as a success by our customers.”

Named as Entrepreneur of the Year was Brandon C. “Cody” Gool, CEO and founder of Generations Propane and owner of the Generations Quick Stop Store.

The son of County Commissioner DeAnna Holliday, he received a proclamation from the commission, as well as from Juli

Smith cited the more than 100 jobs Gool has created in his young career.

“I think we’re on the right track here,” he said.

Receiving the award for Community Servant was Herb Nida, who received the honor from Lawrence County Clerk of Courts Mike Patterson. The award is named for his father, George Patterson.

The dinner did not have the usual keynote speaker, but instead two video messages were played from Democratic gubernatorial Richard Corday and his Republican opponent, Mike DeWine.

Cordray answered a series of questions submitted by the Chamber in his address and promised to focus on infrastructure as governor.

DeWine opted to forgo the submitted questions and provided a speech in which he touched on his platform, including an effort to see that every Ohioan graduates from high school.

“I believe Ohio’s best days are yet to come,” DeWine said.

The Chamber’s new officers were sworn named and sworn in, including External Vice President Melissa Butterworth,

New President Katie McKnight did not make the dinner, but had a more than valid excuse. She had given birth to a new daughter earlier in the day.

The Ohio State Highway Patrol is investigating a two-vehicle crash in South Point that killed a man Friday morning. At... read more