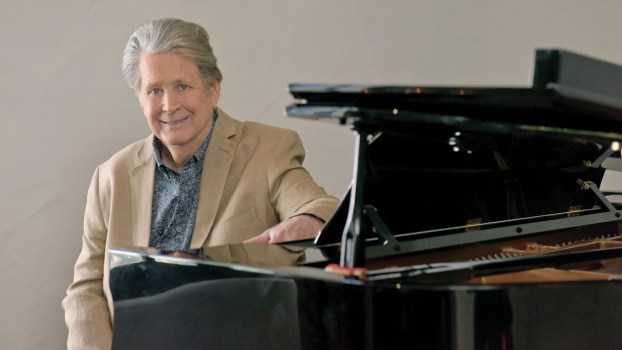 Photo by Brian Bowen-Smith Singer, songwriter and producer Brian Wilson, the creative genius behind the Beach Boys’ classic hits and acclaimed albums, such as “Pet Sounds,” will perform tonight at the Keith-Albee Theater in Huntington as part of the Marshall Artists Series.

HUNTINGTON — The audience at the Keith-Albee tonight could not ask for a better escape from the Election Day news coverage, as they will be treated to the music of a man hailed as one of America’s all time greatest songwriters.

Brian Wilson, the co-founder and creative mastermind behind the Beach Boys, is set to perform in Huntington as part of the Marshall Artists Series.

The show is part of the tour featuring the final performances of “Pet Sounds,” the group’s 1966 release, which is considered the group’s magnum opus and consistently ranked as one of the best albums of all time.

Wilson formed the Beach Boys at the age of 19 in 1961, alone with his brothers, Carl and Dennis, high school classmate Al Jardine and cousin Mike Love.

Taught by his father to play piano and self-trained in recording techniques, Wilson taught the group to sing harmonies, became their chief songwriter and, beginning with their third album, their producer.

The group quickly racked up chart hits that have become part of the cultural landscape, such “I Get Around,” “Surfin’ USA,” “California Girls” and “Barbara Ann.”

Distinguished by the group’s harmonies and Wilson’s increasing complex production, the band’s songs had vast appeal, with their subject matter centered around surfing, girls and summer themes.

But mixed in were more introspective pieces, such as “In My Room,” which were precursors to the next phase of the group’s work.

After retreating from touring to focus on studio work, Wilson heard The Beatles release of “Revolver,” which motivated him to craft a more complex album in which none of the songs were filler. The result was “Pet Sounds.”

Combining the rock format with orchestrations, avant garde arrangements and more innovative layers of vocals, the album, almost entirely written and composed by Wilson, moved away from the summer themes to lyrical content dealing with doubt, alienation and loss of innocence.

The album and change of directions initially drew mixed reactions from fans and critics, though Wilson told The Tribune he isn’t surprised it’s still being discussed 50 years later.

And, as the album has grown to legendary status among critics, Wilson said he thinks audiences have also come around as well.

“Yeah, I think they like it more now,” he said.

Often considered the centerpiece of the album is “God Only Knows,” chosen by Pitchfork as the greatest song of the 1960s and the track Paul McCartney has cited as his all-time favorite song.

“God Only Knows’ is one of the few songs that reduces me to tears every time I hear it,” McCartney said 2007. “It’s really just a love song, but it’s brilliantly done. It shows the genius of Brian.”

As “Revolver” had inspired “Pet Sounds,” Wilson’s work is said to have motivated the Beatles to then create their own masterpiece, “Sgt. Peppers Lonely Heart Club Band.”

Wilson’s planned follow up, “Smile” was abandoned, as friction grew in the group over the change in direction, and the next years would see the musician become increasingly withdrawn from the group as he battled drug addiction and mental illness.

Wilson, who has been diagnosed with schizoaffective disorder, causing auditory hallucinations and other distortions of reality, became reclusive in the early 1970s and only sporadically contributed to the group’s output, as it continued on, with Carl serving as musical director.

Following the deaths of Dennis, by drowning in 1983 and Carl, from cancer, in 1998, the band unofficially dissolved, though Love later got the license to tour under the name with Bruce Johnston, who joined in 1965, and other musicians.

Over time, having beaten addiction and received proper treatment to manage mental health, Wilson began to re-emerge as a solo artist, recording and playing live.

This culminated in 2004, when he revisited the “Smile” sessions and completed the work as a solo album, “Brian Wilson Presents: Smile,” performing it live in a series of acclaimed shows.

He took part in the brief reunion of the Beach Boys for their 50th anniversary in 2012, before the two camps split, with Love touring under the band name, while Wilson played shows with Jardine and early member David Marks.

Wilson spoke with The Tribune regarding tonight’s show, for which he summed the setlist.

Wilson, 76, has acquired a reputation over the years with journalists as a man of few words in interviews, often giving only the briefest of answers to questions.

He was polite, but characteristically quick, in a phone call on Friday.

When asked, which he prefers, concerts or the studio, Wilson said, “I like playing live more.”

He said in addition to the well-known hits, his band does try to break out a few lesser-known songs for the shows.

As for the song he enjoys performing most, he chose “Wouldn’t It Be Nice,” the opener from Pet Sounds, which he once said he hoped would capture “a feeling of great joy.”

Wilson has said he does not listen to much contemporary music, and, when asked what one song or album he would recommend to younger listeners, he doesn’t hesitate for a second in his answer.

“Be My Baby,” he says, citing the landmark single by the Ronettes, for which he famously listened to hundreds of times, studying its production by Phil Spector.

“I haven’t been lately,” Wilson said, when asked if he has been working on new material to follow up his 2015 album “Pier Pressure,” stating he spends his time off the road watching television.

He said they will be performing “Pet Sounds” in full for the show, in which he is joined by Jardine and former Beach Boy Blondie Chaplin, as well as Jardine’s son, Matt.

Also in the line-up are the Wondermints, the power pop vocal band with whom he recorded his version of “Smile.”

“They’re great players,” he said of them.

Wilson said he is enjoying the latest leg of the tour, which kicked off last week.

The show is set for 7:30 p.m. tonight. For more information on tickets, visit www.marshall.edu/muartistseries.

On Saturday and Sunday, a large section of downtown Ironton will be transformed into a wizard’s wonderland with exotic beasts,... read more