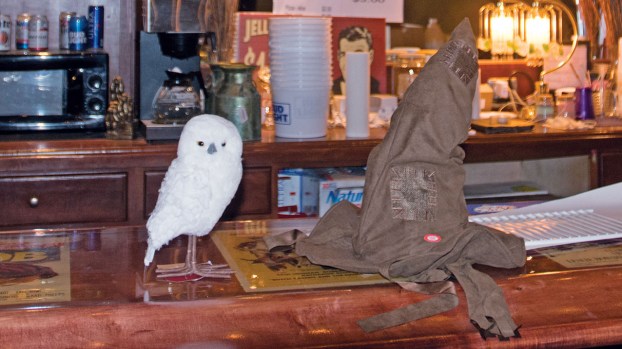 The Tribune/Mark Shaffer The Ro-Na Theater is being decorated for the Ironton Wizardfest, set for this weekend.

On Saturday and Sunday, a large section of downtown Ironton will be transformed into a wizard’s wonderland with exotic beasts, ButterBrew, wand fights, a sorting ceremony and a grand ball.

Before Halloween was even over, Ironton Wizardfest members started decorating the Ro-Na Theater to transform it into the Two Beaters Club and turn the former movie screen area into a space for wizard battles and a grand ballroom. A dementor hung from the ceiling amidst a field of 16,000 LED lights. Banners of different houses hung in a hallway. A train was set up to hold a banquet of roast pork, brooms were being set up, there were a couple white owls, dragon eggs were being created and a sorting hat had arrived. After months of experimenting, the proper ButterBrew recipe has been completed.

A week out, there is a lot done and a lot more to be done.

So, it had to be asked “Why a Wizardfest?”

“Why not,” Brad Bear, one of seven of the Wizardfest’s organizing members, before laughing. “Honestly, we are all fans of the Harry Potter films and books and J.K. Rowling’s fictional world. And it just seemed like “Why not try and make a festival around it.”
Bear said, when he was growing up, there were a lot of fall festivals, from large ones held by towns to small ones held by groups or churches. But many have fallen by the wayside.

“The ones that are left are very specific, like pumpkin festivals, and those are great.”

But, Bear said, Ironton doesn’t have anything for the pop fiction audience. Rick Jansen, of Friends of Ironton, wanted something to bring in a different audience than the ones that come to town for Rally on the River or Heritage Festival or the Cruise Line.

Bear said that a Harry Potter-theme was chosen because so many people love the boy-who-lived. The books have become part of the cultural landscape and, in many cases, the kids who stood in line at midnight to get the latest Harry Potter book now have children of their own and there is a shared love of the book and movie series.

“Pop culture festivals allow people to share with their kids something that they love and they grew up with,” Bear said.

Bear said they also wanted to showcase what could be done in Ironton in terms of a festival in an odd way, since the Harry Potter universe lends itself to lots of ideas to play with.

“Everything is fair game; there are mythical creatures, classes and potions. When you translate that to the real world, there are many things in Appalachian culture that lean right into that,” Bear said. “Big bubbling cauldrons, we use those for apple butter and beans. Woodworking, that leads to wands, broom making. It is exposing people to our culture wrapped in the them of a wizard’s magical universe.”

Bear said it has been a wonderful playground turning the Ro-Na into a wizarding world.

“We want to create something that is from top to bottom, a wonderful, positive experience for the city, for the guests, for the vendors,” he said.

Among the things that fans can do are ride a 150 foot long zip line, see fire performers, see exotic animals like snakes, reptiles, a camel or a wallaby, participate in cosplay competitions, try an escape room, attend workshops and even have a proper wand fight.

“We are going to be the second festival in the United States to have interactive wands,” Bear said. “Our wand dueling class is using wands that duel against each other, sort of like laser tag. Before, you just waved your wand around and pretended. Now, you don’t have to pretend, there is live feedback as to whether your spell worked. We will have 72 of those, so you can duel in real time.”

And Bear said that, after a month of experimenting, their ButterBrew recipe has been perfected.

“I will be the first to say that it is on point,” he said. “It’s like a gourmet butterscotch soda. It has 11 ingredients. It is great.”

Wizardfest begins runs from 10 a.m.-8 p.m. on Saturday, with the Wizard’s Ball from 9 p.m.-midnight. The festival runs from 10 a.m.-4 p.m. Go to go to ww.irontonwizardfest.com for a complete schedule of events.

Space, Faber, Sprague speak with The Tribune The general election is just three days away and statewide candidates for office... read more