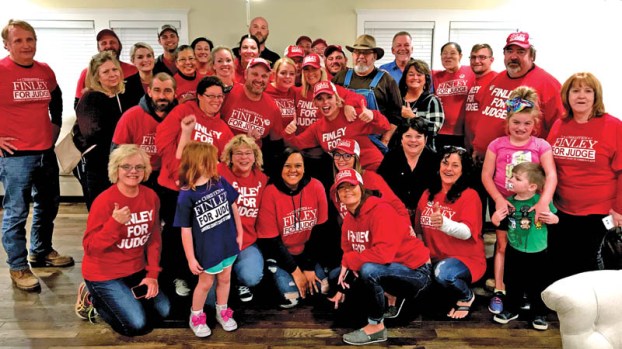 While national media were projecting Democrats were set to gain control of the U.S. House election on Tuesday night, in Lawrence County the sweep went the other direction.

Republicans won all three of the countywide offices on the ballot as well as a number of regional races.

Incumbent County Commissioner Freddie Hayes Jr. and County Auditor Jason Stephens were re-elected, each to their third term in office.

The race is nonpartisan but the candidates identified with their parties in messaging.
In unofficial results, Finley won 56 percent of the vote to Capper’s 44 percent.

Celebrating at home, Finley was surprised and, when asked if she had expected the win, said “absolutely not.”

“I really can’t believe it,” she said. “I just sincerely want to thank everyone who voted for me, from the bottom of my heart.”

Finley who works as an attorney at Meyers & Neville, LLC, based in Chesapeake, was making her first bid for office.

“My intentions were sincere when I began this race,” she said. “I fully want to see Lawrence County succeed.”

She said she believes she will be the first female judge in the general division.

When asked her message to all voters, she said “they can expect me to be a judge who administers justice fairly to everyone.”

“I hope for the next six years, I can earn their respect,” Finley said.

At the Lawrence County Republican election headquarters, located at The Hills shopping plaza, the mood was celebratory, with many hugging and congratulating Stephens.

“It’s a big night for the Lawrence County Republican Party,” Stephens, who serves as chair for the county party, said, adding that he was not too surprised at the good night his party was  having.

“I kind of expected it,” Stephens said. “We’ve had a lot of people on the ground before the election, but it’s hard to quantify it before the votes are counted.”

He also said he was happy to see high turnout in the county.

“It’s good to see this many people vote and taking part,” he said.

He said he was especially thankful in his race, where he defeated Democrat Jason Tolliver, 65 to 35 percent.

In the county commission race, Hayes defeated Democrat Robert McCollister, a former Rock Hill coach and teacher, 61 to 39 percent. It was McCollister’s first bid for office.

Hayes, who survived a close primary in the spring, ran on a message of “hard work” and cited accomplishments such as securing funding for a new senior center and EMS station for the eastern end of the county.

In legislative races, Republicans held on to the two Ohio representative seats that cover Lawrence County.

In the 93rd District, Ryan Smith, who serves as speaker of the Ohio House, defeated first-time candidate and political newcomer Samantha Thomas-Bush, a Proctorville attorney.

Smith won 76 percent of the vote to Thomas-Bush’s 24 percent.

Baldridge won 61 percent of the vote to Buckler’s 39 percent.

In the Fourth District Court of Appeals race, incumbent presiding Judge Marie Hoover, of Portsmouth, was behind to Jason Smith, an Ironton attorney.

For the other seat on the court, Mike Hess, a Commercial Point attorney, was leading Portsmouth attorney Valarie Gerlach, 61 to 39 percent.

On Saturday and Sunday, a large section of downtown Ironton will be transformed into a wizard’s wonderland with exotic beasts,... read more