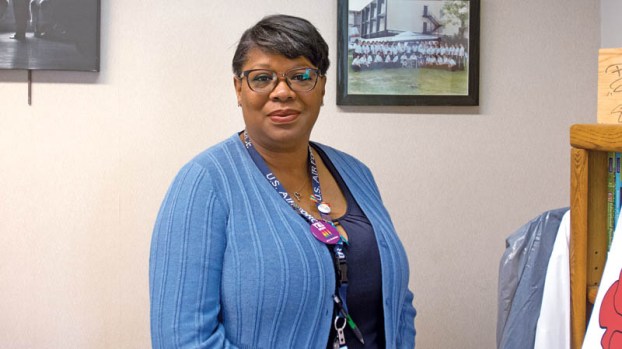 OUS’s McKenzie has made a career of serving military family

Teresa McKenzie always knew she wanted to help people. But after graduating high school, she didn’t know her career path would take her from North Carolina to California to Germany to Washington, D.C. to Flatwoods, Kentucky and then eventually to the campus of Ohio University Southern in Ironton, where she is both the Accessibility Coordinator and the Veteran’s Service Coordinator.

After graduating high school in 1983, she went to the Western Carolina University to get an accounting degree but, in her second year, she changed her major to  Psychology and got a Bachelor’s Degree in Psychology with a minor in Guidance Counseling.

“When I got out of college, I had all these ideas that I was just going to be able to walk into a job and make all kinds of money and move out of my parent’s home,” she said with a laugh. “That didn’t materialize.”

She had a friend from college who had recently joined the Air Force.

“So I thought ‘Let me look into this,’” McKenzie said. “I wanted a job, I wanted to move out of home. So I joined the Air Force.”

With her degree, she became an inpatient psychiatry tech. Her first assignment was at Travis Air Force Base in California. The first Gulf War had just started and she was concerned she was going to be sent to the conflict. Instead, she was sent to Wiesbaden, Germany, where there was a regional medical center for U.S. troops.

“We saw a lot of patients from the first Gulf War and Operation Desert Storm,” McKenzie said. “When they left the desert, they came to Wiesbaden and we treated a lot of troops. We also treated Terry Anderson when he was released.”

Anderson was an Associated Press reporter who was captured in 1985 by militants in Lebanon and was held until 1991.

“Our hospital was where he came,” McKenzie said. “I was out on the balcony when his helicopter landed.”

McKenzie said it wasn’t a culture shock to go from wanting to be a psychologist in a private practice to helping service members recover from things like post-traumatic stress disorder. She said that the Air Force continued her training with classes and tests to help service people.

“For me, these people were now my people, because I’m military,” she said. “It wasn’t me treating people who I couldn’t connect with, it was me treating my own people. We had Marines, Air Force, Army, Navy… it didn’t matter, they were mine, they were military.”

Her last assignment was at Andrews Air Force Base in Washington, D.C. That is where she met her future husband, whose home was in Flatwoods, Kentucky.

“He got out first and moved back here,” McKenzie said. When she left the Air Force, she followed him here and got a job at Pathways in Morehead, Kentucky.

She left Pathways to work at Shawnee State University in Portsmouth, working with adults to get them into college.

“When I left Pathways, I wanted the most important question I heard was “What do I need to take to graduate?’” she said. “I talked to them about the importance of higher education, of getting a GED, of the fact that the more education you get, the better the job opportunities and the better salary you can make.”

McKenzie came to OUS to be the Accessibility Coordinator and the Veteran’s Service Coordinator. She helps students with disabilities have equal access to education despite any underlying condition.

“They have the same right to an education as anyone else,” she said. “It’s not more, it’s not less; it is the same education. If it is on this campus, I make sure students can access it.”

She said she loves working with veterans.

“I really love it. I am a vet, so I get it,” McKenzie said. “I get the transition. There are a lot of things you don’t let go of when you leave the military.”

As an example, she said it is hard for her to carry anything on her right shoulder because when she was in the Air Force, she had to leave her right hand free to salute  officers.

“So you might see me loaded down, but it is on my left side. And I see other vets doing the same thing,” McKenzie said. Other issues vets have after serving in the military is something as simple as deciding what to wear since they had a uniform that they wore everyday in the service and never had to think about it. They also don’t have things like an officer telling them what time their work shift is.

“I like to work with veterans and helping them to understand all that is available to them, whether it is just scheduling, meeting with their advisors or letting them know that OUS offers free counseling to our students if they have PTSD and need academic accommodations,” she said. “We have had students who have back injuries from IEDs and sitting for long times in hard. Letting them know what is available to them is a good thing.”

And they help the vet students get all the things in place when schools start.

“We want to have all those things in place so they don’t have an additional worry on top of everything,” McKenzie said.

While her journey isn’t the one she expected after leaving school, McKenzie said she is happy where she ended up.
“I love what I do,” she said.