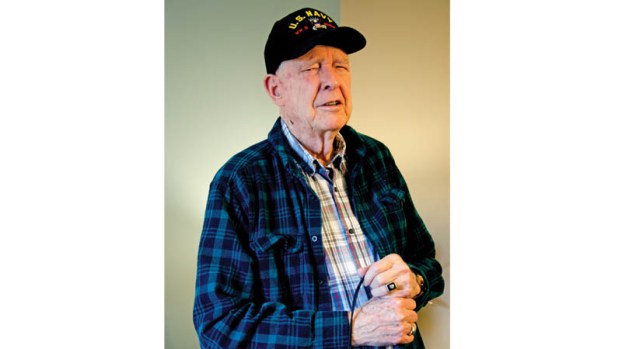 Paul Johnson, a resident of the Wyngate at RiversEdge in Rome Township, is a U.S. Navy veteran of World War II and the Pacific theater of operations.

ROME TOWNSHIP — At the height of World War II, Paul Johnson said he lied about his age so that he could go serve his country.

“Back then, all the boys, we lied about our age to get in,” he said about joining the Navy.

A native of Huntington, he said he was at West Virginia Tech when he and two others went to draft board on Jan. 10, 1944.

“I was 17 and four months,” he said. “The girl at the desk, she looked at me and smiled and asked ‘Is there something I can do for you?’”

He said he told her he was 18 and he was quickly accepted. By Jan. 28, he was shipping out.

“It was fast back then,” Johnson said.

Now 91, he lives at the Wyngate at RiversEdge senior living community in Rome Township and has been there for 2 and a half years with his wife, Thelma Jean Tiller Johnson. The couple recently celebrated their 50th anniversary.

He has two children from a previous marriage, as well as two foster daughters.

Johnson is also enrolled in Tri-State Bible College and is in his third semester.

During the war, Johnson served on the USS Lindenwold LSD-6, a dock landing ship, which took him to the Philippines.

From there, he went on to Okinawa.

Following that, he returned home, where re-enlisted for another two years.

In 1947, Johnson was discharged and it was at that point that he learned he was blind in one eye.

“I didn’t know,” he said, saying it was service-related. “But seven months after it went out, it came back.”

Following his service, he got an MBA in management from Marshall University and went to work in insurance sales, as well as building houses.

And for 20 years, he ran Paul Johnson’s Coffee Shop at 875 4th Ave. in Huntington, until the building was taken by Reuschlein Jewelers in 1977.

“It was right in the middle of town,” he said of his business. “Then the jewelry store bought out five floors.”

“It means a whole lot,” he said. “It makes me remember the good time I had in the Navy. It was really very beneficial to me.”

He said he learned a lot in boot camp.

“I learned to follow orders and do what I was told,” he said. “Military service is very beneficial for boys 18 and over. It teaches them and it’s a chance for education and experience. It’s very maturing. Most boys at 18 think they can whip the world, but they need a little teaching.”