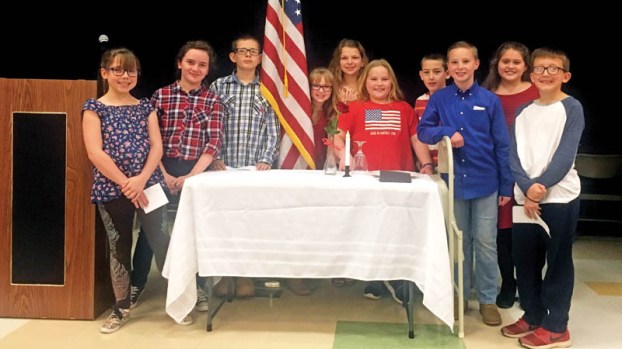 Members of Dawson-Bryant Elementary School’s fifth grade class took part in a white table ceremony at the school on Monday, honoring those who are on duty or missing in action.

DEERING — As many schools have been doing this week, students at Dawson-Bryant Elementary took the time on Monday to pay tribute to those who have served the country.

A white table ceremony took place during the school’s lunch periods on Monday, with members of the fifth grade taking part.

“The white table is a way to remember service men and women who won’t be sharing a meal today, whether they’re on duty or missing,” assistant principal Monica Mahlmeister said of the empty chair at the display.

In addition to the white table, the school also featured a Wall of Honor in its hallway.

“We had all students bring in a picture and the name of a family member in the service,” Mahlmeister said.

In addition to photos, names of service members were listed on stars, of which at least 400 now filled the hallway.

In addition to Dawson-Bryant, other elementary school in the area hosted veterans events.
Veterans were invited to South Point and Burlington Elementary on Friday, while South Point High School hosted their annual veterans breakfast that day.

The American Red Cross is looking for donors because it is facing a severe blood shortage since donations have been... read more